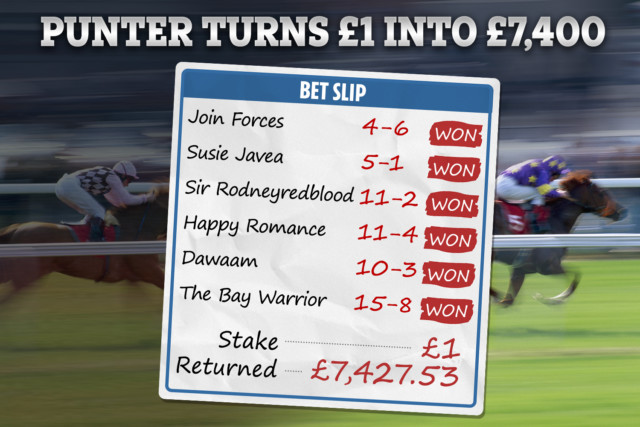 A GENIUS punter needed less than two hours to turn £1 into £7,400 after landing a monster horse racing bet.

The shrewd bettor picked out six horses running on the flat at Southwell and Chelmsford.

Sir Rodneyredblood was the first horse past the post at odds of 11-2 in the 6.10pm race before Susie Javea scooped the pot in the 7.55pm.

The incredible bet – which included only one horse at odds shorter than evens – was confirmed as genuine by Coral’s David Stevens.

He said: “Starting with Sir Rodneyredblood at Chelmsford at 6.10pm, and ending less than two hours later with Susie Javea at Southwell, this shrewd racing fan had a Thursday evening to remember.

“They turned just £1 into more than £7,000 by finding these magnificent six winners, and we can only pay out with a smile and congratulate them on an incredible punt.”

The unnamed punter started their gamble with the four-year-old scooting home by a head on April 29.

Marco Ghiani guided Sir Rodneyredblood, a popular all weather runner, to victory at decent odds of 11-2.

Next up was 11-4 chance Happy Romance, who prevailed by just a neck under Sean Levey at Chelmsford.

It was over to Southwell then where 4-6 shot Join Forces also won by the smallest of margins to keep the bet alive.

The cash out would no doubt have been huge by this point but the plucky punter kept going.

And they were rewarded when The Bay Warrior romped home under jockey Oisin Murphy at Chelmsford before 5-1 Susie Javea landed the windfall at Southwell ten minutes later.