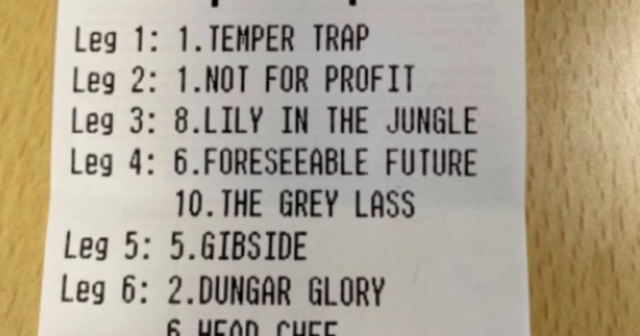 A GENIUS punter who won a grand from £20 was left thinking what could have been despite his big win at Ripon on Monday night.

Kieran’s bet didn’t contain a single loser on it and he won a grand from £20 – but it could have been much, much more

He asked a friend to put £20 on the Tote placepot for him – where punters pick a horse to place in every race.

Kieran managed that successfully, turning his stake into a tasty £976 return – in his own words a ‘good day’s work’.

But you could argue he was underpaid when you consider what he could have won thanks to his phenomenal picking.

The punter’s bet got off to a good start when 15-8 Temper Trap demolished the field in the first and 11-4 Not For Profit followed up in the second.

Lily In The Jungle was the biggest winner on the night at 4-1 in the next, before Foreseeable Future triumphed at 100-30.

The placepot looked in the bag when Gibside won the penultimate race at 6-4 and the decent payout was sealed when 2-1 fav Dungar Glory won the last.

But here’s the sucker punch.

Kieran not only picked every single winner – but in the races where he picked two horses to place, he got the forecast too.

That means he even predicted which horses would finish 1-2 and in what order.

He nailed the forecast for Foreseeable Future and The Grey Lass, as well as Dungar Glory and Head Chef.

You can do the Tote jackpot where you pick a horse to win in every race, but agonisingly that was at Wolverhampton and not Ripon on Monday.

Kieran posted a photo of his winning betslip with the message: “Tweeting this because it never happens… but sent a friend a placepot to put me on tonight at Ripon and EVERY SINGLE HORSE WON.

Punters missing out on even bigger paydays is nothing new, but it usually happens from cashing out early.

This bettor watched on in horror as he missed out on £10,000 after taking the money before the final leg of his huge treble ran.