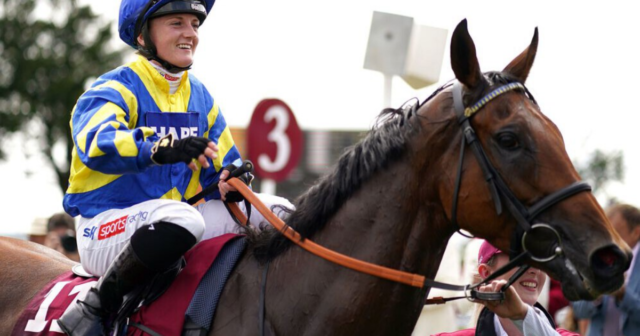 GIRL Power. That’s what Glorious Goodwood has been all about.

Alcohol Free, Lady Bowthorpe and Suesa gave the girls a right party on the Sussex Downs.

Doyle was simply brilliant on Trueshan

That said we shouldn’t be surprised. It was way back in 1983 that Cyndi Lauper told us all that ‘Girls Just want to have Fun’.

Let’s turn the clock back to Tuesday, when Alan King banged in his first Group 1 winner on the Flat with Trueshan in the Group 1 Al Shaqab Goodwood Cup.

Now of course with Stradivarius out this was far from a vintage renewal, and it’s fair to say not many girls are ever going to have much fun with the gelding in the future.

That said, it was the young star Hollie Doyle who was on top and showed her strength and ability once again.

Trueshan is very useful in the mud, but his connections really should let him jump a hurdle one day. The Singula Partnership who own Trueshan are National Hunt people. Be brave!

I was lucky enough to interview Oisin Murphy on ITV after the Group 1 Qatar Sussex Stakes, and it has to be said the champion rider gave Andrew Balding’s filly as masterclass to follow up the success of the great Chief Singer in the race for owner Jeff Smith.

Murphy was hung out wide early, but got tucked away and then when his mount hung right in the closing stages he kept the filly off Poetic Flare. It was brilliance in the saddle from a guy on top of his game.

Snow Lantern was third in the Sussex, which meant the Falmouth Stakes from was given a huge boost.

That was good news for Lady Bowthorpe, who was an unlucky fourth at Newmarket have not got the breaks when jockey Kieren Shoemark wanted to get loose.

Stepped up in trip here in the Group 1 Qatar Nassau Stakes, Lady Bowthorpe was perfectly placed to whip by Zeyaadah and Joan of Arc.

The success gave Kieren Shoemark – a man I can’t praise enough for recovering from drink and drugs issues – a first Group 1 as well as sparkling owner Emma Banks. She roared her filly home like her big signing Katy Perry did her hit song.

Trainer William Jarvis had already won at Group 1 level with Grand Lodge. But that was back in the day of black and white TV. He was still in tears nearly three hours after the race. That’s what it means.

Banks is no ordinary lady as she looks after some of the biggest names in the music business. She helicoptered in to Goodwood and she helicoptered out.

But a quick phone message she sent me later in the evening just showed her sense of humor and joy at the success. At 10pm she wrote: “Just watching it back on TV now. Hoping we win!” Don’t worry Banksy it wasn’t a dream.

Yesterday it was sad to see Battaash flop in the King George Qatar Stakes, and Oisin Murphy must be wondering what he has to do to get Dragon Symbol home.

However, Suesa looked a young filly of huge talent for the French who rarely have a top class sprinter. She was another massive winner for this season’s big race King William Buick.

So today it’s the final day of a Goodwood that hasn’t always been Glorious weatherwise, but has produced much joy on the track.

For purists it will be all about another girl Wonderful tonight in the Group 2 Qatar Lillie Langtry for fillies and mares over 1m6f.

Wonderful Tonight should win, but I think ALBAFLORA is a cracking each way bet for Ralph Beckett and Rossa Ryan. The Coronation Cup fourth is a pretty decent filly who stays well and she looked really good three runs ago at Ascot in the mud.

Meanwhile the big betting race of the day is the Unibet Stewards’ Cup Handicap over 6f.

It’s hard to know whether CHIEFOFCHIEFS will like Goodwood as all his best form is at Ascot. That said, he’s shown in his last few runs that he’s perfectly capable of winning off 99 including when fourth last time in the Wokingham. He’s sure to be staying on well under Jamie Spencer to hopefully get a place at the very least.

For the final time this week – good luck!