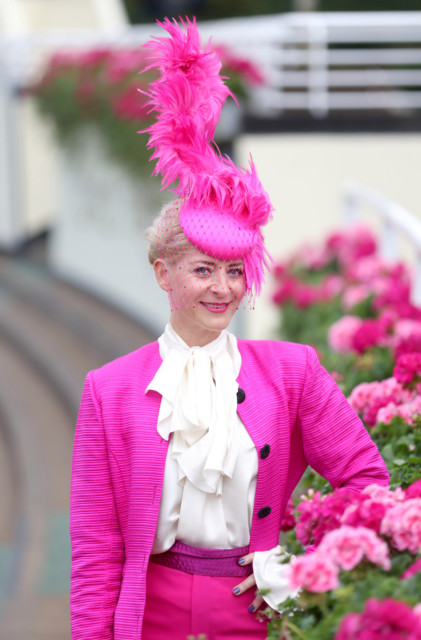 IT WAS a soggy start to day three of Royal Ascot – but stunning racegoers ensured the weather wasn’t going to dampen their spirits.

Female attendees wore their brightest colours and most eye-catching hats for Ladies Day at the East Berkshire event.

Spectators could be seen arriving at Royal Ascot today in dresses that were all colours of the rainbow – along with gorgeous towering heels.

The wisest among them wore hats so wide they shielded them from the rain, while others were spotted grappling with umbrellas.

One of the famous faces to get to the important gathering early was Charlotte Hawkins.

Yesterday, thirsty racegoers enjoyed champagne and cheered on their favourite horses beneath the sunshine.

Charlotte Hawkins wowed on day three of the horsing event 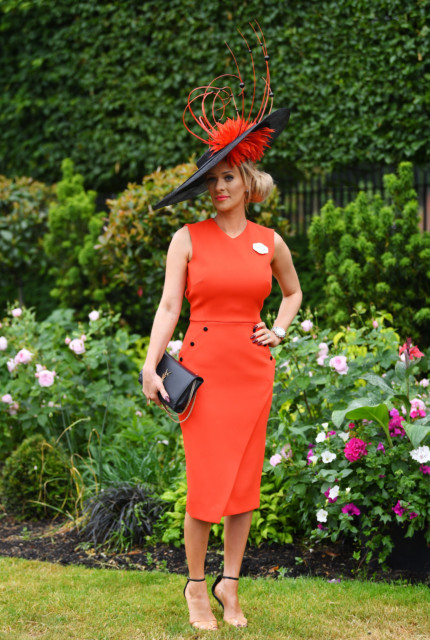 This attendee stunned in orange 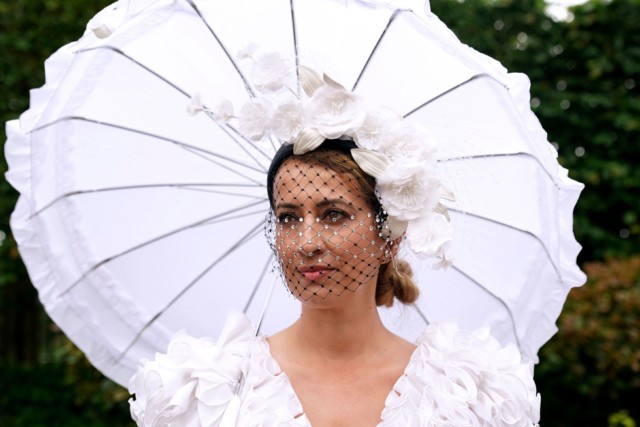 Many opted for hats that happened to keep off the rain 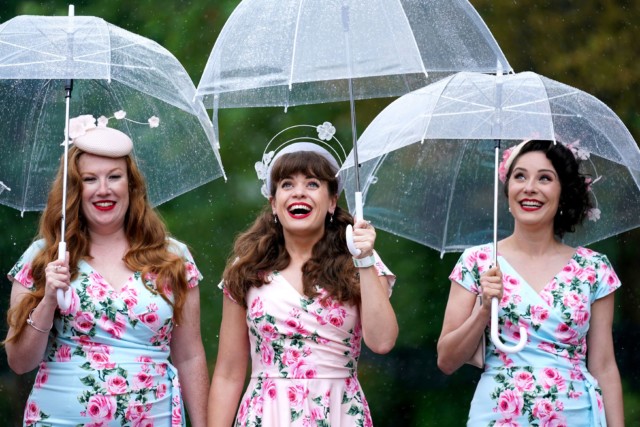 Others were forced to use umbrellas 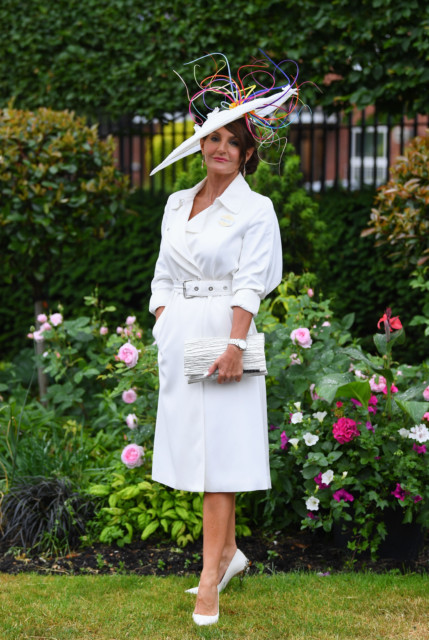 Spectators did not allow the weather to dampen their spirits

And on the first day, female attendees turned heads in eye-catching dresses and extravagant hats.

But those turning up for the latest instalment of the prestigious moment in the annual horse racing calendar did not disappoint.

Numerous fashionable ladies made their hats the focal point – including wide-brimmed pink feathery creations, and fascinators adorned with flowers.

However, the frocks did not disappoint either, covering rainbow hues such as fuchsia, baby blue and bright red. 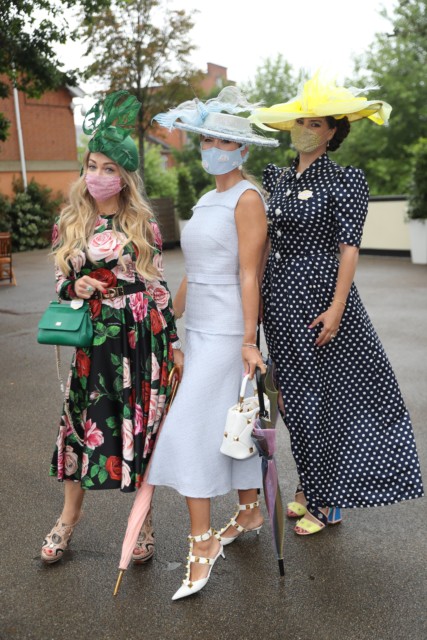 This trio masked up too 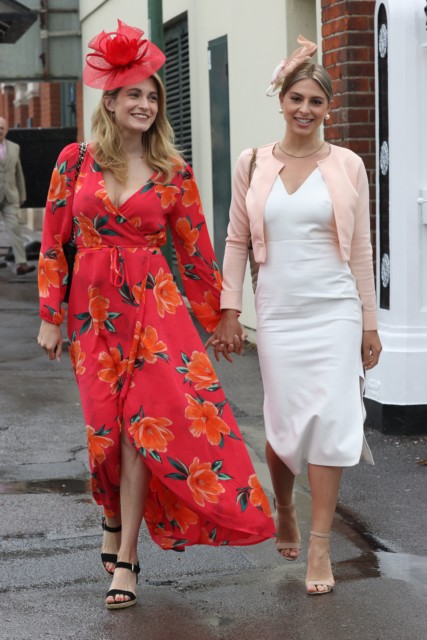 Many opted for towering heels 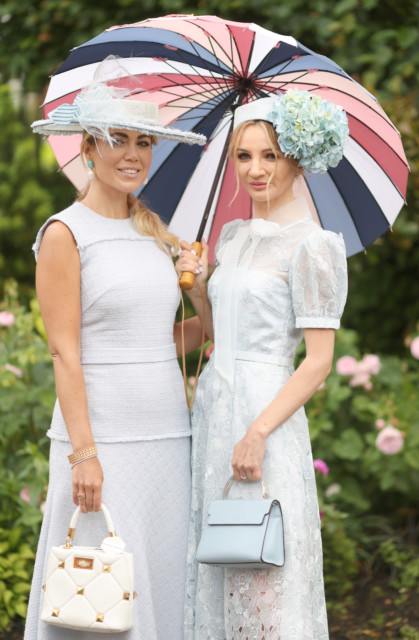 The fashion did not disappoint 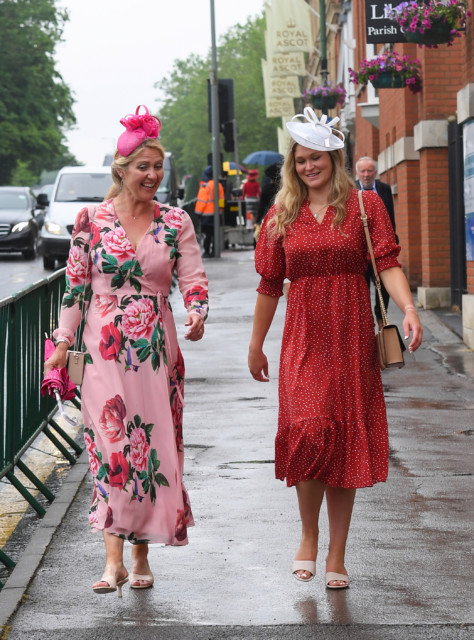 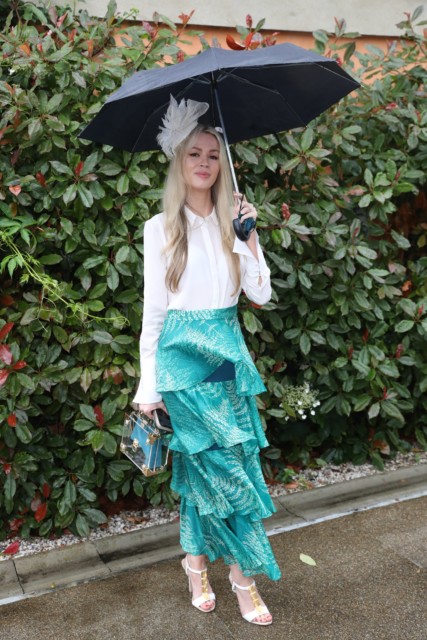 This lady opted for a statement skirt

The Queen was notably absent from Royal Ascot so far this week.

It is the second time in her 69-year reign that the monarch, 95, has been absent from the event, after being forced to stay away when the pandemic meant the 2020 event was held behind closed doors.

This year, an estimated 12,000 lucky racing fans are able to attend each day.

Her Majesty’s racing manager, John Warren, suggested to Radio 4 that she might make it to see some racing later in the week. 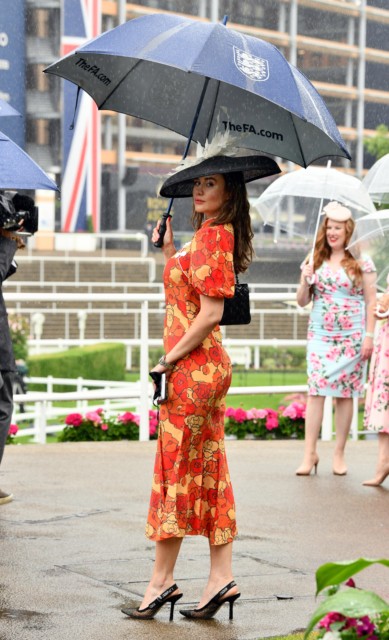 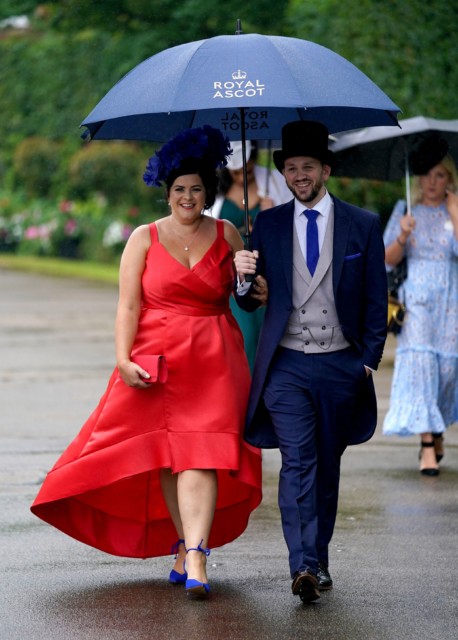 The glamour was in full force 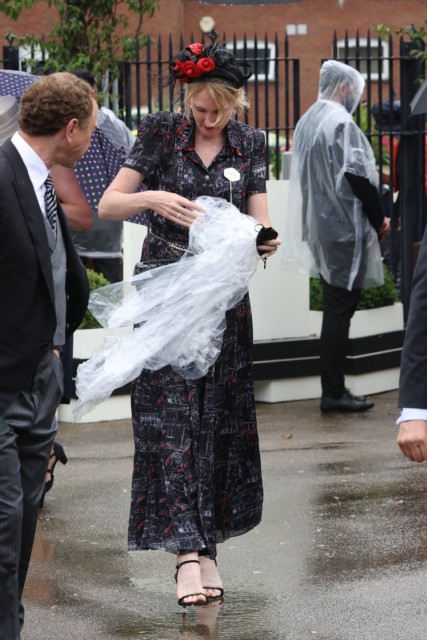 Some struggled with the rain 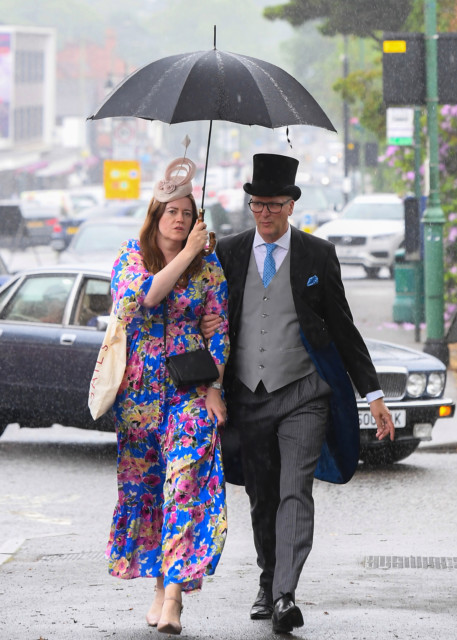 Others kept in the summer spirit

However, other members of the royal family have already made an appearance at Royal Ascot.

Zara Tindall along with husband Mike were in attendance on the first day.

Stepping out on both days were Princess Anne, as well as Prince Edward and Sophie, Countess of Wessex, and Prince Charles and Camilla, Duchess of Cornwall.

There have even been some famous faces spotted at the meeting – including Simon Cowell and wife Lauren Silverman, as well as Georgia Toffolo. 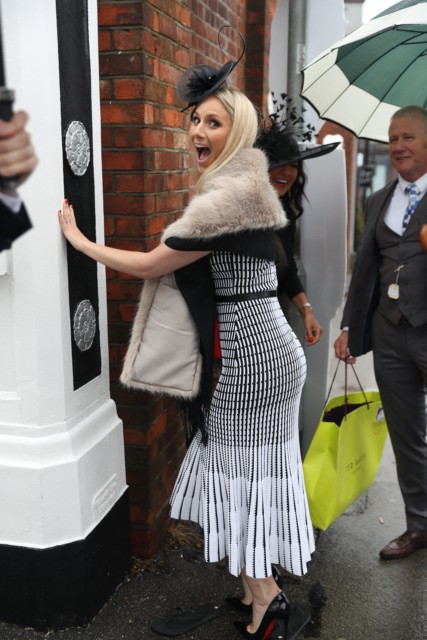 One lady wrapped up warm 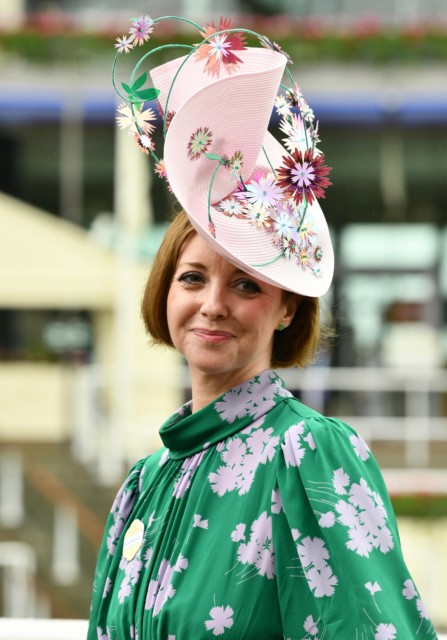 The hats were a feast for the eyes 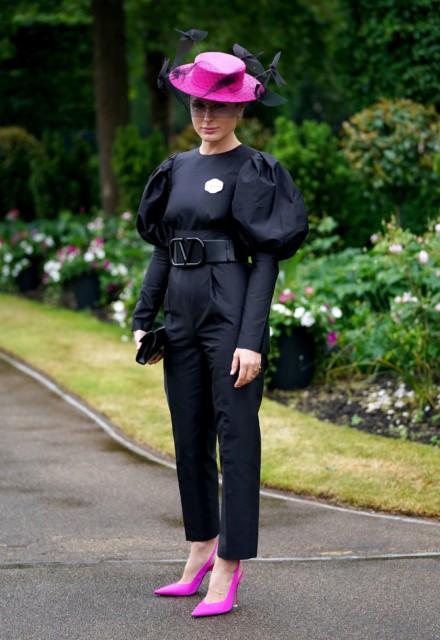 This lady cleverly coordinated her pink hat and shoes

As in previous years, guests have to adhere to a strict Royal Ascot dress code, which varies depending on which area you are in.

If you’re lucky enough to be in the royal enclosure, ladies are asked to wear “modest” dresses or skirts which finish just above the knee or longer.

Meanwhile, dresses or tops must have a strap of one inch or wider (strapless, off-the-shoulder and spaghetti straps are banned).

Hats or fascinators are compulsory, with a base of four inches or more.

If you’re in the cheaper Queen Anne Enclosure, ladies can get away with fascinators and slightly shorter dresses. 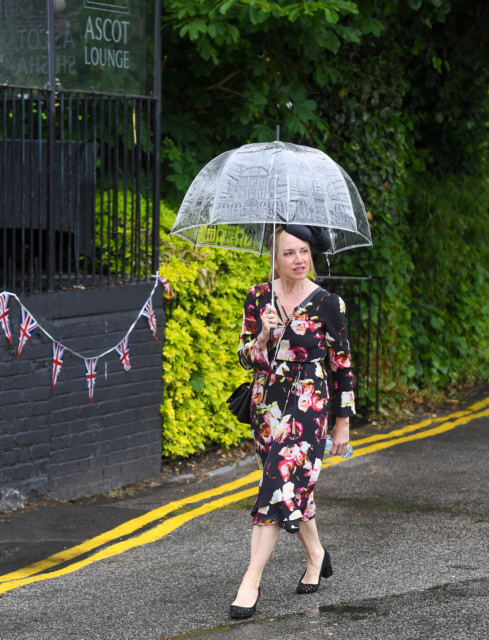 There was much puddle-dodging happening 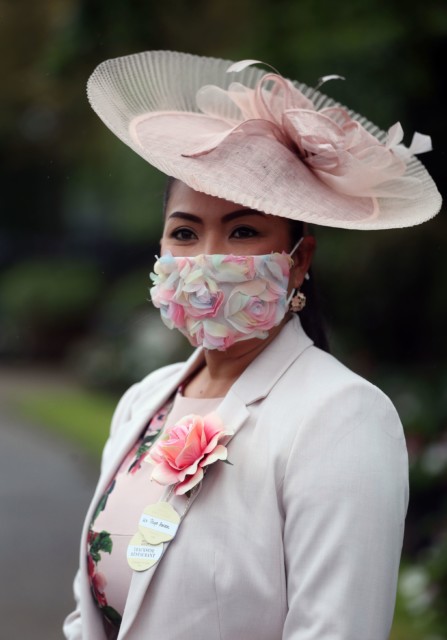 Many masked up too

It hasn’t been confirmed if the Queen will be in attendance this year, but she usually arrives at Royal Ascot in a horse-drawn carriage, as the venue is located close to Windsor Castle.

However, it has been confirmed that there will be no royal procession this year as there has been in the past.

If you haven’t been lucky enough to bag a ticket for Royal Ascot, you can watch all of the races live on ITV.

Usually more than 300,000 racegoers, dressed in their finery, gather for the five-day sporting spectacle.

Yesterday, Royal Ascot racegoers pulled out all the stops in a dazzling array of hats for the first day.

Last year, they glammed up at HOME after the pandemic impacted spectating plans.

And this is the official dress code – what you should wear to the racecourse and latest rules.