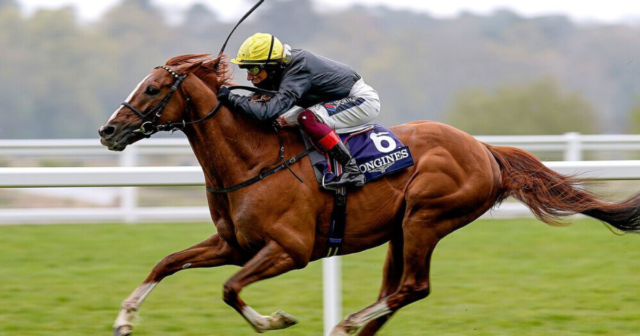 GOODWOOD is upon us – and it’s going to be Glorious.

Today the big race is the Al Shaqab Goodwood Cup, which is a Group 1 these days and, of course, sees Stradivarius trying to win the prize for a record fifth time on the trot.

Andrea Azeni landed the prize twice for John Gosden, while this afternoon’s rider Frankie Dettori goes for the hat-trick on the seven-year-old.

For me it’s impossible to oppose STRADIVARIUS and while he’s short odds he looks a massive price in many ways.

Things did not go right in the Ascot Gold Cup and it’s easy to argue he’s become a little vulnerable.

That said I still think he’s a class act and he’ll hack up with the Gold Cup hero Subjectivist currently sidelined.

ITV coverage gets under way with a handicap over 1m2f.

SKY DEFENDER is down in the weights a little bit now and might be worth a few quid eachway at long odds for Mark Johnston and Franny Norton.

The stable go well at this fixture and Sky Defender is down to 99 from up to 105 in the ratings.

He ran well at Epsom off 104 in April and was terrific here against Maydanny and Bell Rock in July of last year.

The Group 2 Unibet Vintage Stakes is for juveniles over 7f.

This trip will be right up the street of Royal Ascot winner BERKSHIRE SHADOW and I take him to score for Andrew Balding and Oisin Murphy.

The Coventry Stakes winner should relish going up a furlong and in general terms this does not look the strongest renewal.

There’s another Group 2 race over 7f in the Unibet Lennox Stakes.

SPACE BLUES is the defending champion and he can beat his Royal Ascot-winning stable companion Creative Force despite giving weight away.

William Buick rides Space Blues for Godolphin and he was in tremendous form until being well beaten at Meydan in March.

I would suspect he has been laid out for this by connections.

The show on ITV ends with a handicap over 5f. Wide open.

I’ll take a wild chance with RECON MISSION who goes for Tony Carroll and Ray Dawson.

My hope is not as good as he once was, and his rating is way down from what it has been.

That said, he managed to win at Epsom three runs ago so still retains some ability. I’ll take a chance he slips into the frame at the very least.

Of the other races on the card, there is a juvenile maiden over 6f. There might be something useful in here, but CITY RUNNER has done well at Windsor and Salisbury and might be able to use that experience. Scattering was an eyecatcher last time.

In the 1m fillies’ handicap URBAN VIOLET ran well in the Sandringham at Royal Ascot and could go close for Mick Channon and Silvestre de Sousa.

The card closes with a handicap over 6f. LOVELY BREEZE is creeping up the handicap but might still be hard to stop for Hugo Palmer and William Buick.