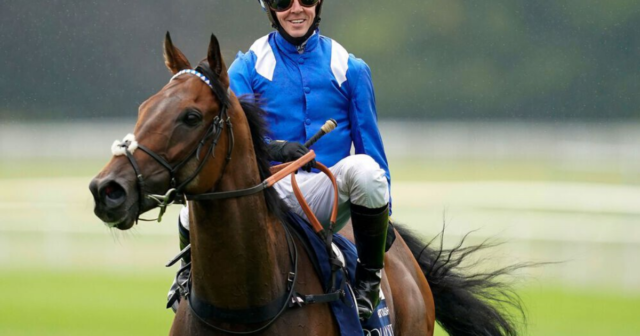 “IT’S not what I am underneath, but what I do that defines me”.

The words of superhero Batman, and ‘pow’ do they ring true when it comes to the super sprinter Battaash who is out for history at Glorious Goodwood today.

Battaash will again be partnered by Jim Crowley

Some will take him on after a delayed comeback at Royal Ascot which saw him finish fourth to Oxted in the King’s Stand Stakes. But not me.

The Goodwood five furlongs is just about pure speed, and that means it’s home for BATTAASH.

The Charlie Hills dasher faces a deeper field than usual, with July Cup runner-up Dragon Symbol in the field, as well as Art Power, Glass Slippers and French raider Suesa.

But Battaash can do what Stradivarius failed to do earlier in the week and make history under Jim Crowley.

ITV coverage at Goodwood Friday gets under way with a handicap over an extended 2m4f. A tough renewal.

Obviously stamina in easy ground is at a premium, and the one I will risk is the old character COEUR DE LION for Group 1 winner Alan King and the talented Thore Hammer Hansen.

The previous Royal Ascot winner did not do much at the fixture last time when I tipped him there but that said he wasn’t disgraced and has been dropped 1lb. Has won on heavy at Chester should more rain come.

BAEED might just turn out to be one of the stars of the season and while testing ground would be an unknown it should be drying out nicely for him.

He’s only 6lb off being the best horse in the world after just three runs, which is kind of crazy, but was still impressive in Listed company last time. Goes for William Haggas and Jim Crowley.

Arguably the big betting race of the day is the Unibet Golden Mile.

ACQUITTED is not that well handicapped and has a high draw. However, the Hugo Palmer runner has been consistent all season and efforts at Sandown and Ascot have been very sound.

Stays and goes in the ground. James Doyle on top is a bonus,.

Back to Group 3 company for the Glorious Stakes over 1m4f.

Capacity crowds have been welcomed all week at Goodwood

MOGUL has been desperate recently and would probably prefer fast ground.

That said, he’s easily the best horse in the race and if he is every going to bounce back this is his chance for Aidan O’Brien and Ryan Moore. The Hong Kong Vase hero should just be too good and outclass this field.

The penultimate is a nursery handicap over 6f. SIR HENRY COTTON goes for Andrew Balding and Oisin Murphy and after a decent run at Newbury might be well handicapped.

Finally another handicap to end the day over 1m3f. I love SCAMPI but usually with chips! That said he can go well for Balding and Murphy once again!