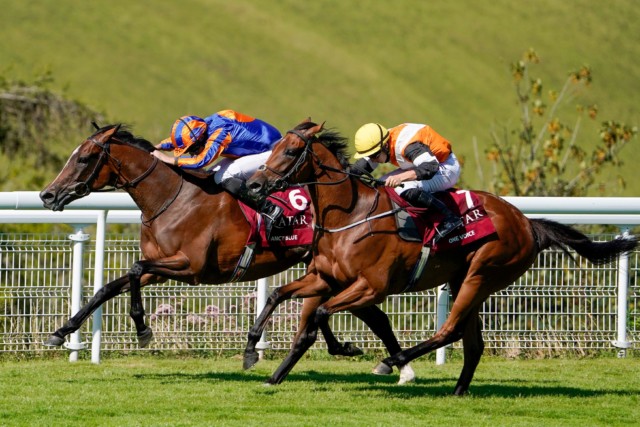 DONNACHA O’Brien’s continued his stunning start as a trainer with Group 1 honours at Glorious Goodwood.

The 22-year-old sent out Fancy Blue to win the French Oaks earlier this month – and she was as hard as nails to follow up in the Nassau Stakes.

The filly is now a dual winner at the highest level, but it’s a remarkable feat for O’Brien, who only saddled his first winner five months ago.

And he admitted the Nassau was a difficult watch as his 11-4 shot was driven into a narrow lead by Ryan Moore approaching the final furlong.

Outsider One Voice threw down a stern challenge with the winning post in sight, but Fancy Blue lifted under pressure to win by a neck.

O’Brien said: “We were very happy with her coming into the race. Her work had been really good, she was in fantastic form and everything had gone perfectly to plan, so we were full of confidence.

“We’ll give her a little break now as she’s had a busy start to the year and there’s not much for her for a few weeks.

“We might look at Irish Champions Weekend, whether that’s going back to a mile for the Matron Stakes or running in the Irish Champion Stakes, we’ll see.

“After that we’ll probably go on to Arc weekend, where she could run in either the Prix de l’Opera or the Arc itself.

“After that it will either be the Breeders’ Cup or there is a race for her in Japan in the middle of November – the Queen Elizabeth, I think it is.

“It’s a race for big money and she gets a bonus for that after winning the Prix de Diane.

“I’m sure the Japanese people would love to see her (as a daughter of Deep Impact).

“I know from when I was riding Saxon Warrior (a son of Deep Impact) he got a good following from the Japanese fans and it was somewhere I always wanted to go.

“We’re not really sure what’s going on in America and what will happen to the Breeders’ Cup, but they’re the options we’re looking at.”

Advertisement. Scroll to continue reading.
In this article:Goodwood