Glorious Goodwood: Frankie Dettori reflects English King’s run in the Derby and looks ahead to his Day 3 rides
Advertisement 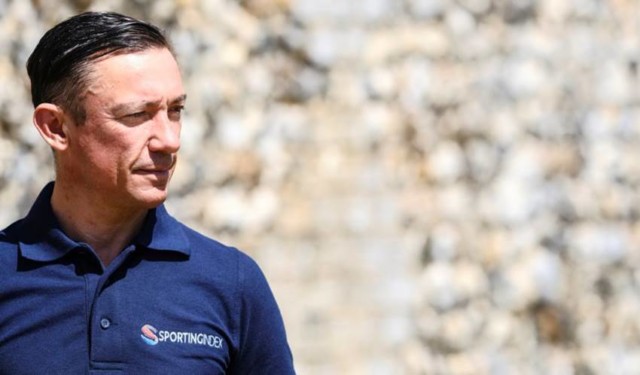 I’M hoping to wipe the slate clean and erase the memory of last month’s Derby today — and I’m sure I’m not alone.

So much was expected of English King (2.45) on the Downs at Epsom and it certainly wasn’t his fault he failed to deliver.

The race was a nightmare for us from start to finish and, taking everything into consideration, it was a brilliant achievement for the horse to finish fifth.

But then we were not the only ones to be disappointed as it was one of the strangest races I have ever ridden in. Very few horses even got into the race. Emmet Mullins and Serpentine had it won at Tattenham Corner!

You have to hand it to Emmet on the day. It was a good ride and Serpentine could yet prove a very decent Derby winner.

The writing was on the wall for English King at the start.

He had got a bit warm and then, from the worst draw possible in stall one, he jumped out left.

We were stuck behind Mogul and Ryan Moore’s backside  for most of the way while Serpentine just went about his business up front.

I guess in the end it was a case of teaching English King as much as I could and he was an eye-catcher in a bunched finish for the places. I told Bjorn Nielsen afterwards I felt we’d have finished second with a fair run.

You can’t forget his easy Lingfield win and, based on that, I don’t think a track like Goodwood will be a problem either.

Obviously we’re up against Mogul and Khalifa Sat again so it looks a good field, but I’ve got high hopes of him getting back to winning ways

I’ve been involved in so many races she’s run in but never ridden her myself. She’s an absolutely super mare who runs consistently well at the top level and, although Ryan will obviously have had first pick, I think we’ve got a good chance.

You can’t ask for much more than a mare who is solid, honest and proven. She also looks pretty uncomplicated so overall.

Earlier on the card, I’ve got Magical Morning (1.45). He’s up in trip and into handicap company for the first time off a mark of 99.

He was a bit disappointing at Newmarket last time but  we expect better today.

I’m not sure if it was the ground that day, as it came up quite soft, but for whatever reason he just didn’t run his race. I’ve always thought he’s a nice horse with plenty of potential so hopefully he can bounce back. It’s a competitive race but I like him and his  form is good.