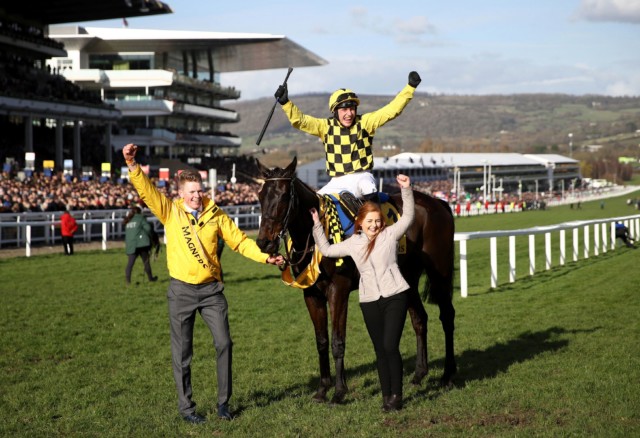 AL BOUM PHOTO has made Tramore his luxury second home away from Willie Mullins’ Closutton Stables.

The dual Gold Cup champ has used the track the last two years on his way to memorable wins in the biggest and best race of all.

And as he sets out on his mission to repeat Best Mate’s legendary heroics by winning a third Gold Cup in three years, why change a winning formula?

Al Boum Photo’s record in the New Year’s Day Chase has brought a whole new meaning to this meeting.

All that will be missing this year is the bumper crowd that would have been out in force to see the champ in person.

Maestro Mullins – in red-hot form over the Chritsmas period – makes it clear he thinks the track is perfect for his Gold Cup star.

And other stars such as Laurina and Saint Roi have used the picturesque coastal track as a prep before wins at Cheltenham.

Mullins said: “We’ve started off plenty of horses that have won in Cheltenham and other big venues, in Tramore.

“I think that’s key to the preparation of any jumping horse.

“They learn a lot down there too. You’re up and down, around a bit, but that’s no different from Cheltenham – you’re either turning or jumping.

“They learn a good bit there as well that they mightn’t learn on big flat tracks.

“Ground is important for every jump horse. Proper jumping ground is.

“We’re more or less guaranteed, you don’t know what the weather can do but you’re nearly always guaranteed nice ground down there.”

It’s not always been plain-sailing for Al Boum Photo.

He looked a long way off a potential Gold Cup hat-trick hero when only completing three of his first six starts over fences.

That included the infamous incident late in the day at Punchestown when he took out Finian’s Oscar with the race at his mercy.

But just two runs later any kinks had been ironed out and he had triumphed at Tramore and Cheltenham.

His first Gold Cup success under Paul Townend in 2019. Trainer Willie Mullins was scooping the great race for the first time, having previously saddled the runner-up on 6 occasions. #CheltenhamFestival #82DaysToGo #GreatFestivalMoments pic.twitter.com/EBAq0CHQhH

Maybe, just maybe, there is something in the water down in Tramore?

And for jockey Paul Townend, no other horse has taken him to places Al Boum Photo has managed.

Less than a year after the lowest of lows and that heartbreaking episode at Punchestown, Townend enjoyed the highest of highs.

And the Ladbrokes ambassador admits he’s a horse that’s close to his heart.

He explained: “It will be exciting to get back on him on the track. He’s always exciting to ride.

“He’s a horse close to my heart with what he’s done for me.

“Al Boum Photo is obviously a dual Gold Cup winner so hopefully he will win again so the race can set him up for Cheltenham like it has for the last couple of years.

“I was happy enough that Monalee didn’t turn up as we had to give him plenty of weight.

“There are others that are classy enough in their own right with opponents like Acapella Bourgeois, Brahma Bull and Djingle, who will make sure there is a bit of pace in the race.”

The Mullins team have been in flying-form over Christmas and Townend has enjoyed the ride.

The likes of Chacun Pour Soi, Appreciate It and Monkfish have all enhanced their reputations as well as The Big Getaway in the same Marie and Joe Donnelly silks as Al Boum Photo.

Townend added: “We are going down there with the horses in good form.

“We couldn’t be happier with where we are at the moment. It’s a big bonus.

“It would be a bad Christmas if we were going to Tramore under a bit of pressure, but we are full of confidence.

“Hopefully Al Boum Photo can have a safe trip round and come back in front so we can be looking confidently towards Cheltenham.”