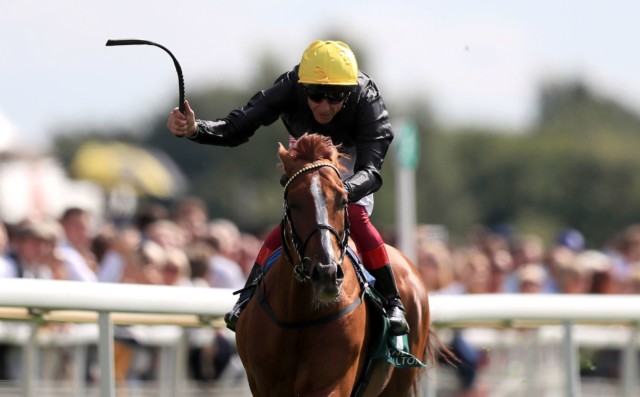 A small but select field of seven have been declared for the Hurworth Bloodstock Coronation Cup on Friday – the first Group 1 of the season.

The rescheduled race – usually held at Epsom, but at Newmarket this time around – will feature John Gosden star Stradivarius and an Aidan O’Brien double act of Broome and Anthony Van Dyck.

Investec Derby winner Anthony Van Dyck has not won since his Epsom heroics and stablemate Broome will be seen in new colours after changing hands in the off season.

But Charlie Appleby’s returning Ghaiyyath will be the warm favourite for the first race of the latest QIPCO British Champions Series.

His Group 1 winner was last seen winning by eight lengths at Meydan and has course form to his name.

His main rival may well be Roger Varian’s Defoe according to the bookies.

His trainer said: “Defoe’s a horse who tells you when he’s right and is giving us the right messages.

“He’s on his racing weight, he’s come good in his skin and he seems to have a bounce with him. He’s tuned-in for the race, but it might take a career-best to win it because the race looks a touch stronger this year.

“He seemed to really love Epsom last year, when he put it to bed in a few strides and won going away.

“But, saying that, he’s run well at Newmarket the couple of times he’s performed there and I don’t think the track holds too many fears for him.”

Meanwhile O’Brien is hopeful a switch back to better ground will see Anthony Van Dyck bounce back.

He said: “The soft ground at Ascot wasn’t the right thing to do with Anthony Van Dyck and he paid for it.

“The plan would be to keep him on good ground [this year] and he’s doing everything right at the moment.

“I don’t know much about the mile and a half at Newmarket, but I would imagine you would need to get the trip very well.”