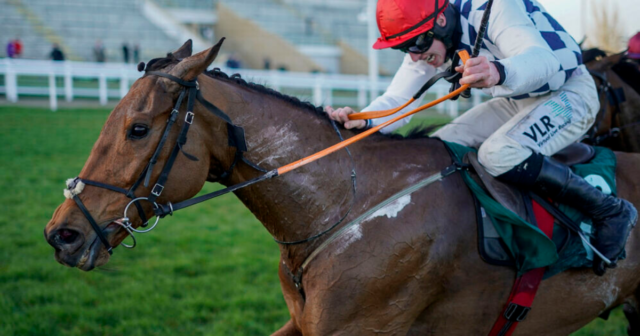 GORDON ELLIOTT has revealed he is plotting a record-equalling fourth Grand National win with a horse who could be the heir to Tiger Roll.

Cheltenham Festival winner Galvin made it six from his last six with a Grade 3 victory at Punchestown on Wednesday.

Elliott’s charge under Davy Russell saw off Willie Mullins’ Annamix by half a length in the three mile chase, despite conceding loads of weight.

That saw him get quotes of 33-1 for the Cheltenham Gold Cup.

But Elliott, who had to watch from the sidelines when the horse won the National Hunt Chase at last March’s Festival, reckons he is more one for the Aintree showpiece next April.

The Irish expert should know, having trained three runners of the world’s most famous race.

The legendary horse did not run last year, when the race was won by Rachael Blackmore on Minella Times.

Speaking after Galvin’s comeback win, Elliott said: “That was a good performance at the weights.

“I knew he’d come on plenty for the run, so it’s great that we’ve won the race again. He only does what he needs to do.

“He’s only a baby but he’s a great horse.

“He’s in the Down Royal [Grade 1 Ladbrokes Champion Chase] so we’ll see if it cuts up.

“Longer-term I see him more as a Grand National horse than a Gold Cup horse.

“But he’s definitely one to look forward to for the season.

“He’s a grand, honest horse and this has been a lucky race for us.”

Galvin is a 20-1 chance for the Grand National, where Any Second Now and Minella Times head the market at 16-1.

Burrows Saint, Secret Reprieve and Castlebawn West come next, all on 25-1.