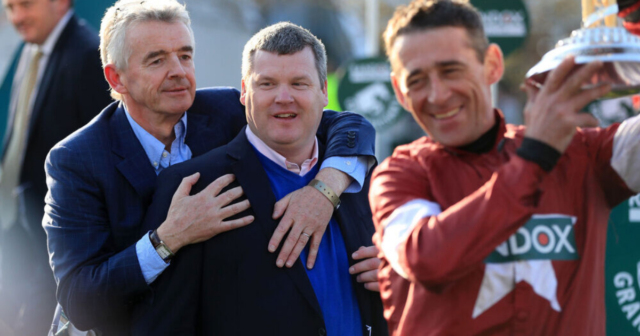 TIGER ROLL is ‘not finished yet’ and will be aimed to match Red Rum’s record three Grand National victories, says Gordon Elliott.

The Irish trainer and three-time National winner says he has one his ‘best hands’ ever for April’s famous race.

Elliott, centre, is dreaming of a third Grand National for Tiger Roll

The horse will run at Cheltenham before hopefully going to Aintree

The Gigginstown House Stud-owned legend did not run in 2021 owing to a dispute over how much weight he would carry.

But the handicapper has relented this year and he will carry 11st 4lb, some 6lb less than top-weight Conflated and Galvin, also owned by Elliott.

The Co Meath trainer, who celebrated Grand National success for the first time in 2007 with Silver Birch, will run Tiger Roll at next month’s Cheltenham Festival first.

But Aintree is on the agenda for a horse – owned by Ryanair boss Michael O’Leary – who retains all his zest.

Elliott, 43, said after the Grand National weights were revealed: “He is in very good form at home.

“We have been training him for Cheltenham all season and we are really looking forward to going back there.

“We will see how Cheltenham goes but he has got a nice weight so the Grand National could be on the agenda.

“The ground was too soft the last day for him. He is coming to himself at home and we are looking forward to running him back at Cheltenham.

“We decided to run him in the National in 2018 as he had lost his way a little bit so we had to try and rejuvenate him and it really worked for him.

“I was nervous going into the next year’s Grand National but it was a dream come true to win it for a second time with him. He was very good on the second occasion.

“To have a horse like him is a dream come true but to win two Grand Nationals with him has just been awesome and I’m very lucky to have him.

“I do think there is still a more in him and we are certainly not finished yet.”

Speaking of some of his 18 other entries, Elliott added: “t looks like it might be one of my best hands in the Grand National as we look to have a lot of great chances.

“You would have to be looking forward to the likes of Mount Ida, Run Wild Fred and Death Duty, who is a dual Grade One winner that at the moment is off 10st 1lb, which looks a lovely weight. Hopefully he creeps in to the race.

“Conflated (11st 10lb) will be going to Cheltenham, while the aim is the Gold Cup with Galvin (11st 10lb) and he would only run in the National if anything happened in the Gold Cup.”