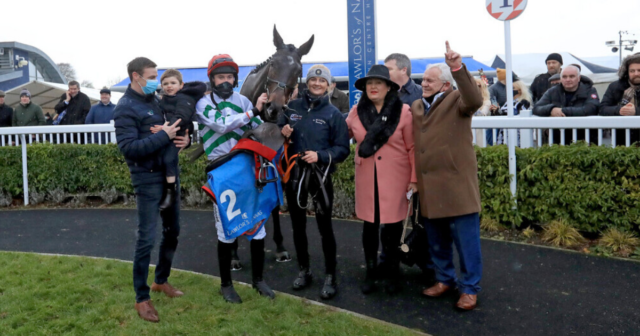 BRILLIANT Ginto was cut into joint-favourite for the Ballymore after a brave Grade 1 win at Naas.

Gordon Elliott’s festive fun rolled on to the New Year as his six-year-old made all to land the Lawlor’s Of Naas Novice Hurdle – a race with a five star roll of honour.

Connections of Ginto celebrate their big win at Naas

The 5-4 favourite was given a no nonsense ride by Jack Kennedy – who was only 50-50 to take the ride with an injury – and saw off Grand Jury and stablemate Hollow Games by just shy of five lengths.

It was a first Grade 1 victory for big-spending owners Bective Stud – who forked out £400,000 for Ginto and watched on from a holiday in Dubai.

The bookies were impressed by the six-year-old and William Hill cut him into 7-1 for the Ballymore at Cheltenham in March.

However, Elliott hinted he may step his ace up to three miles at some point. Coral made him 5-1 second favourite behind Blazing Khal for that heat.

Ginto is a Grade One winner

€470,000 purchase Ginto retains his unbeaten record over hurdles, bringing up the hat-trick in fine style for @gelliott_racing & @jackkennedy15 at @NaasRacecourse pic.twitter.com/JyKi1DJR7J

Elliott beamed: “Jack said he wasn’t doing a stroke the whole way. He jumped well and stays well. He’s very idle in front on his own.

“He’s a fine looking horse. Jamie Codd rode him in Navan where he travelled better with a lead. He was having to do all the donkey work today and a better race will suit him better.

“It’s a first Grade 1 winner for the owners. They are big supporters of Cullentra and of Irish racing. They are on holiday in Dubai and will be watching and hopefully enjoying it.”

The Grade 1 trophy has been won by the likes of Envoi Allen, Bob Olinger and Elliott’s Battleoverdoyen in recent seasons.

And it was a fourth Grade 1 for Elliott over the Festive period, after the successes of Mighty Potter, Fury Road and Gold Cup contender Galvin.

Elliott added: “I think he’ll stay further, I think all he does is stay.

“We had to stretch them and if it turned into a sprint it wouldn’t have worked.

“Hollow Games ran very well. He was stopped a couple of times and probably should have been second.”