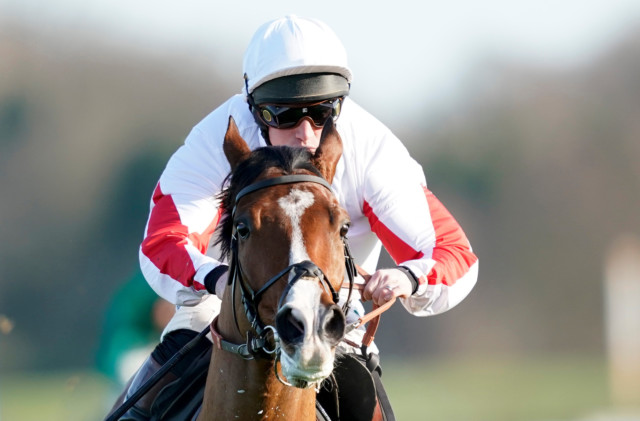 TOP hurdler Goshen is set to make his eagerly-awaited reappearance at Cheltenham next weekend.

The four-year-old has had his return delayed this winter – but Gary Moore confirmed Saturday’s International Hurdle is the big aim.

Goshen is on course for the International Hurdle next Saturday

Goshen was one of the best juvenile hurdlers in training last year and had the Triumph Hurdle at his mercy when unseating Jamie Moore at the final flight.

He had two runs on the Flat over the summer, finishing down the field at Sandown and Goodwood.

Drying ground forced connections to sidestep the Elite Hurdle at Wincanton in early November, before a ‘moderate scope’ prompted Moore to bypass both the Ascot Hurdle and a clash with Epatante in last week’s Fighting Fifth.

Speaking at Sandown, Moore said: “He will gallop in the morning, and if everything is good after that he will go to Cheltenham.

“He had a moderate scope, I wouldn’t say it was bad but it wasn’t good enough to run him.

“We didn’t think he had quite been at his best, so we decided to give him time and time is a great healer. So hopefully next week works out well.

“The ground hasn’t been in his favour but I’m hoping it will be soft at Cheltenham.”

Goshen is 8-1 for the Champion Hurdle with Betfair, with Epatante the hot 7-4 favourite after a breathtaking comeback win at Newcastle.

And Moore was impressed with Nicky Henderson’s mare.

“The thing that impressed me most was how quick she was over her hurdles. She is electric.”