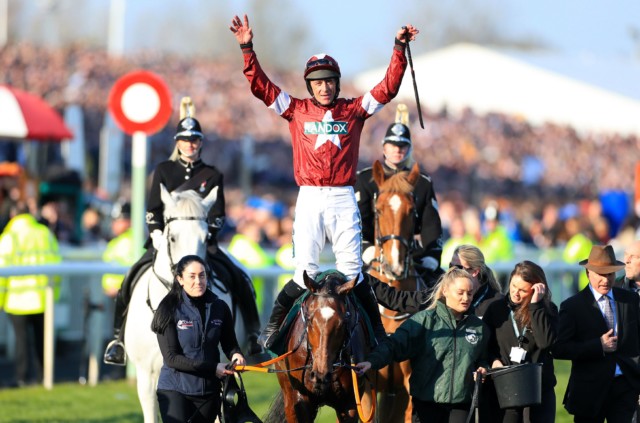 THE RANDOX Grand National could be pushed back to ensure betting shops are open when it’s run.

Currently the Aintree £1million showpiece is pencilled in for April 10.

But with non-essential retail now hopefully open from April 12, the industry could move the running of the National back – so the bookies can be open.

With crowds not able to attend until at least mid-May, opening up the bookies for the annual, once-a-year punters to pop into their local bookie would raise welcome funds for a cash-strapped sport through the Levy.

In normal times, close to £300 million is bet on the race with roughly half the population backing at least one of the 40 hopefuls.

Even in last year’s Virtual Grand National, approximately £260 million was bet on the race and then given to charity.

It’s unlikely the race can be pushed back more than a week, with racing’s fixture list long set in stone.

There would also be safety concerns if the race was delayed much longer, with the prospect of quick ground unlikely to appeal to many horses and trainers.

The prospect of a midweek Grand National could be on the table, as without spectators present there would be little to lose on that front.

Punters packed out the stands for the 2019 Grand National

But TV numbers could then take a hit and contractors ITV Racing, as well as sponsors Randox, would have to give it the green light.

It could be pushed back a weekend and swapped with the Scottish Grand National.

But that would mean moving the entire three day meeting around, a prospect that may prove hard to switch at short notice.

Talks are already underway between the sport and the Betting and Gaming Council.

Heavyweight bookies such as Ladbrokes and Coral support the move given they still have retail shops.

Did you miss our previous article…
https://www.sportingexcitement.com/horse-racing/trainer-andy-irvine-opens-up-on-pain-of-losing-wife-zoe-davison-and-says-each-day-is-difficult-after-28-1-winner