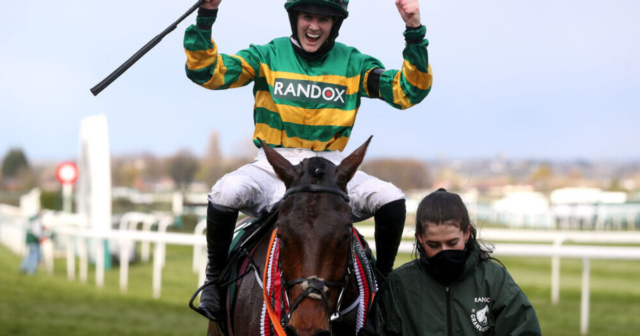 GRAND NATIONAL hero Henry de Bromhead has expressed his shock at the hike in the weights Minella Times has suffered in a bid to defend his Grand National title.

The top Irish trainer is ‘surprised’ the JP McManus-owned hero has given him a rating of 161.

That means he will carry 11st 4lb for the Aintree marathon, the same as dual winner Tiger Roll.

The big jump up the weights comes despite Minella Times, who was ridden by Rachael Blackmore in 2021, falling at Punchestown in December.

And he was pulled up at Leopardstown earlier this month.

Asked about his weight amid his poor form, De Bromhead said: “I’m surprised he’s that.

“I didn’t think he went up as much as that after he won and going on his form this year I’m surprised he got increased.

“He loves it around Aintree and certainly did last year, so hopefully he’ll come back to form now.

“He’s been a little bit off form recently but he looks like he’s coming back to form and hopefully he will by then.

“hey certainly have to enjoy it to do well around there and hopefully going back will help him find his form.”

Meanwhile, Gordon Elliott heads the betting for the £1million contest thanks to Savills Chase winner Galvin.

And Coral make it 2-5 that there will be an Irish-trained winner of the race, while it’s 7-4 for a Brit to come first.

Tiger Roll is 25-1 to match Red Rum’s records of three wins in the race.

Coral’s John Hill said: “Galvin has had success at the highest level this season and goes into the Gold Cup with strong claims.

“He will need to carry joint-top weight in the Grand National, but he tops the betting to give Gordon Elliott another success in the world’s most famous steeplechase.

“Minella Times and Tiger Roll are both at the top end of the betting to come out on top in the race.”

In this article:Aintree, Leopardstown, Punchestown