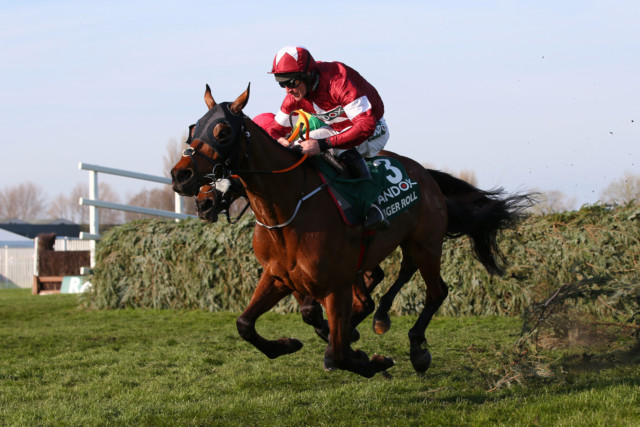 GRAND NATIONAL hero Tiger Roll has ‘no chance whatsoever’ of winning on his big Aintree return, according to Eddie O’Leary.

The two-time Grand National winner will not run in the main race on Saturday this year.

Tiger Roll has ‘no chance’ of winning at Aintree, according to Eddie O’Leary

Instead he has been thrown into the Betway Bowl at 2.50 today, where he is currently a 13-2 shot.

But even after blowing away rivals at Cheltenham in the Cross Country Chase last month, the iconic horse apparently doesn’t have a hope of winning again today.

O’Leary, Gigginstown boss and brother of Ryanair supremo Michael, says their stable star will do well just to come within 20 lengths of the winner.

He told the Racing Post: “Tiger Roll is not a Grade 1 horse and I think he’s completely up against it.

“I hope he jumps well and comes home safe but, to be honest, if he finished within 20 lengths of them we’d be thrilled.

“This isn’t even a good Grade 1, let’s make no bones about that.

“In fact, it’s a terrible Grade 1 if truth be told.

“But we wouldn’t expect Tiger Roll to live with these horses because he’s not as good as them.

Tiger Roll was entered in Monday’s Irish Grand National too before being withdrawn.

That race was won by 150-1 shot Freehweelin Dylan.

Punters were heartbroken the O’Learys pulled him out of Saturday’s big race due a spat over the weight he would have to carry.

That robbed him of the chance to equal Red Rum’s record of three victories in the world’s most famous race.