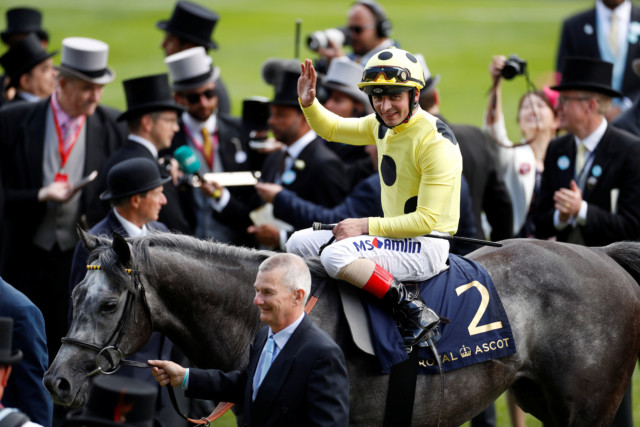 TRAINER Roger Varian suffered another devastating blow when his star Defoe suffered a fatal injury on the gallops on Wednesday morning.

Less than a week ago, fellow Royal Ascot hero and stablemate Mountain Angel was also lost after a similar incident.

Defoe had scaled even great heights than his stable companion, with his nine career victories including a Group 1 triumph in last year’s Coronation Cup at Epsom and success in the Hardwicke Stakes at Royal Ascot on his very next start.

The six-year-old son of Dalakhani was last seen finishing third when defending his Hardwicke crown and was in line to make his next appearance in the L’Ormarins Queen’s Plate Glorious Stakes at Goodwood on Friday.

Paying tribute, Varian said: “He was just a lovely horse. He has been around for a few years and has climbed the ranks from humble beginnings to becoming a Group 1 winner in the Coronation Cup.

“He has been a bit of a star. He was one of those nice guys. My thoughts are with Sheikh Mohammed Obaid his owner, as it is a big loss to him and all the staff at home, who have grown very attached to him over the years.

“He was racing as a seven-year-old and in Flat terms that is a good age and he had been with us for a few years. He was just a pleasure to do anything with. He was one of the good guys.

“I think it would have to be the Coronation Cup as the race that stands out. It is a prestigious race and the only Group 1 he won and it came at a good time. We enjoyed many good days with him and he won nine races from 22 starts. We had some good days out with him and my thoughts are with the owner and the staff.

“My children loved Defoe. He was the first horse they would go to give a carrot to. But unfortunately these things happen.”

In this article:Ascot, Epsom, Goodwood