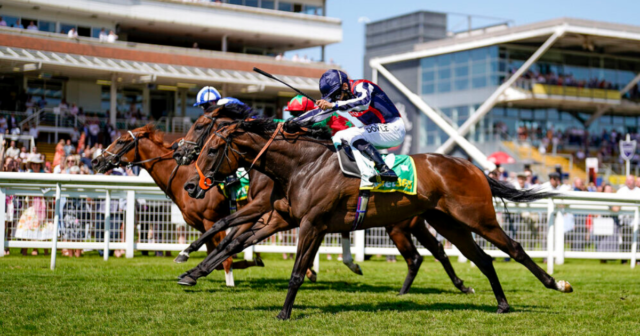 THE Hackwood Stakes at Newbury is one of the big races this weekend.

Can Happy Romance make it two in a row in the Hackwood at Newbury?

Here, Templegate goes through every runner in the race and reveals his tip at the bottom.

FULL of Promise. Has winning form at this level in Dubai and wasn’t disgraced in the King’s Stand at Royal Ascot. This 6f trip suits much better and he may have needed that first British run of the campaign. Chance.

HURRY Harry. Was a close second in this 12 months ago but has still not won on turf. He found the Group 1 Platinum Jubilee Stakes too hot last time but this is easier. Has few miles on the clock so may improve.

NOT Great. Finished last in the Platinum Jubilee at Royal Ascot on his seasonal return and has yet to score beyond Listed level. Saves best for this trip but needs more in this company.

METHOD madness. Has a Listed win over course and distance on his CV but hasn’t won for two years. Solid effort in hot company at Sandown last time but needs another step forward.

MIN the hunt. Lightly raced but does well when he gets on the track, with a Group 2 win over this trip. Pick of form has come on good or softer, which is a concern, but his best form takes him close.

RO can go. Picked through the field to win the Wokingham last time for the second year running. He has come up short at this level before but is in cracking form and is best on quick ground.

COMM off it. Has a Listed win over this trip but has been out of sorts for a while, including when down the field in the Wokingham. Needs more at this level.

FREE bet. Listed winner over this trip two runs ago and not disgraced in the Platinum Jubilee last time. Fast ground suits and trainer Henry Candy does well with sprinters. Each-way shout.

SAINT sinner. Has been racing mainly over 5f lately and was a good sixth in the Group 1 King’s Stand at Royal Ascot latest. He goes well here but the trip is a worry.

GO for it. Won at Ascot the last time he ran in this grade and has held his own twice since in stronger company. Fast ground suits and he looks a big price to make the frame if anywhere close to his best.

CHIL looks hot. Did well last season, winning at this level before ending with a close-up third in the Group 1 Sprint Cup at Haydock. She loves this trip and fast ground is no problem. Solid place claims back from 10 months off.

HAPPY ending. Won this last year and she thrives on racing so her solid Group 1 effort in the July Cup last weekend bodes really well. We know trip and ground are ideal and she can retain her crown on this drop in class.

LEGEND a myth. He’s had just six runs but with a close second in a Group 1 over 7f on the Rowley Course last season the highlight. Struggled in the 2,000 Guineas and again at Royal Ascot so has a few questions to answer.

MAX not a factor. Hasn’t scored his debut last summer and found a Royal Ascot Group 1 much too hot last time. This ease in class will help over a trip that suits but he needs more.

She held her own in the Group 1 July Cup at Newmarket last week and has a good record when turned out quickly.

Man Of Promise showed up well at Royal Ascot and will be happier upped to this trip.

He’s a threat with Go Bears Go and Chil Chil who both look a big price to make the frame.