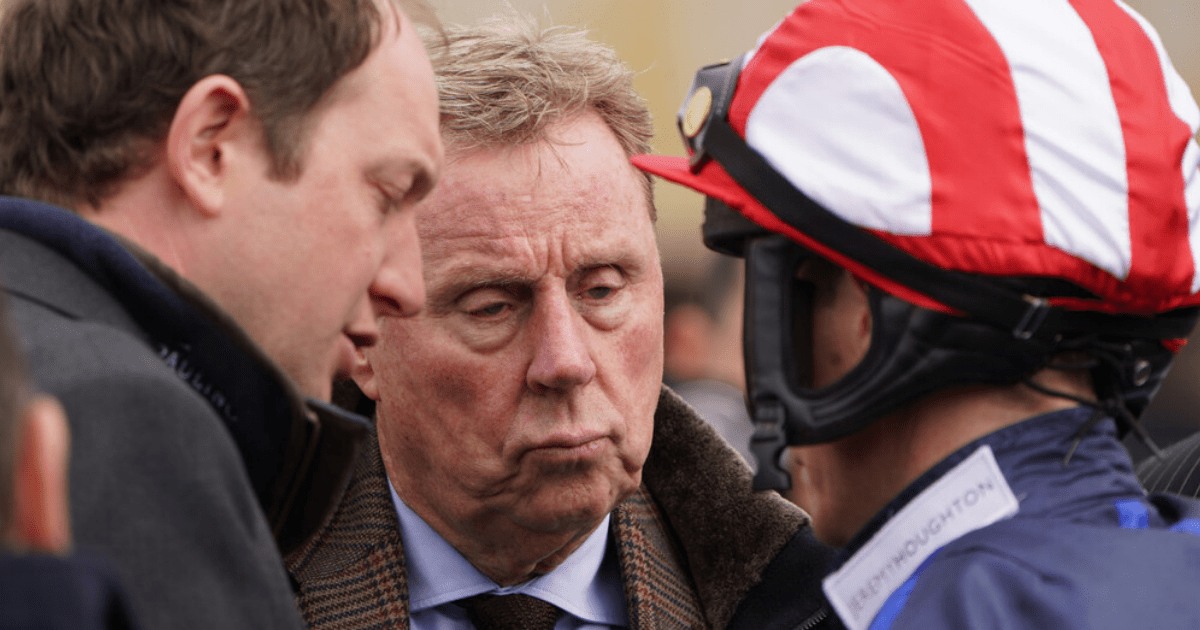 HARRY REDKNAPP hopes this is finally the year he hits the back of the net at the home of jumps racing.

The legendary manager has owned horses on and off for over 30 years – but so far his only victory at Cheltenham was of the 3-0 variety in the FA Cup. 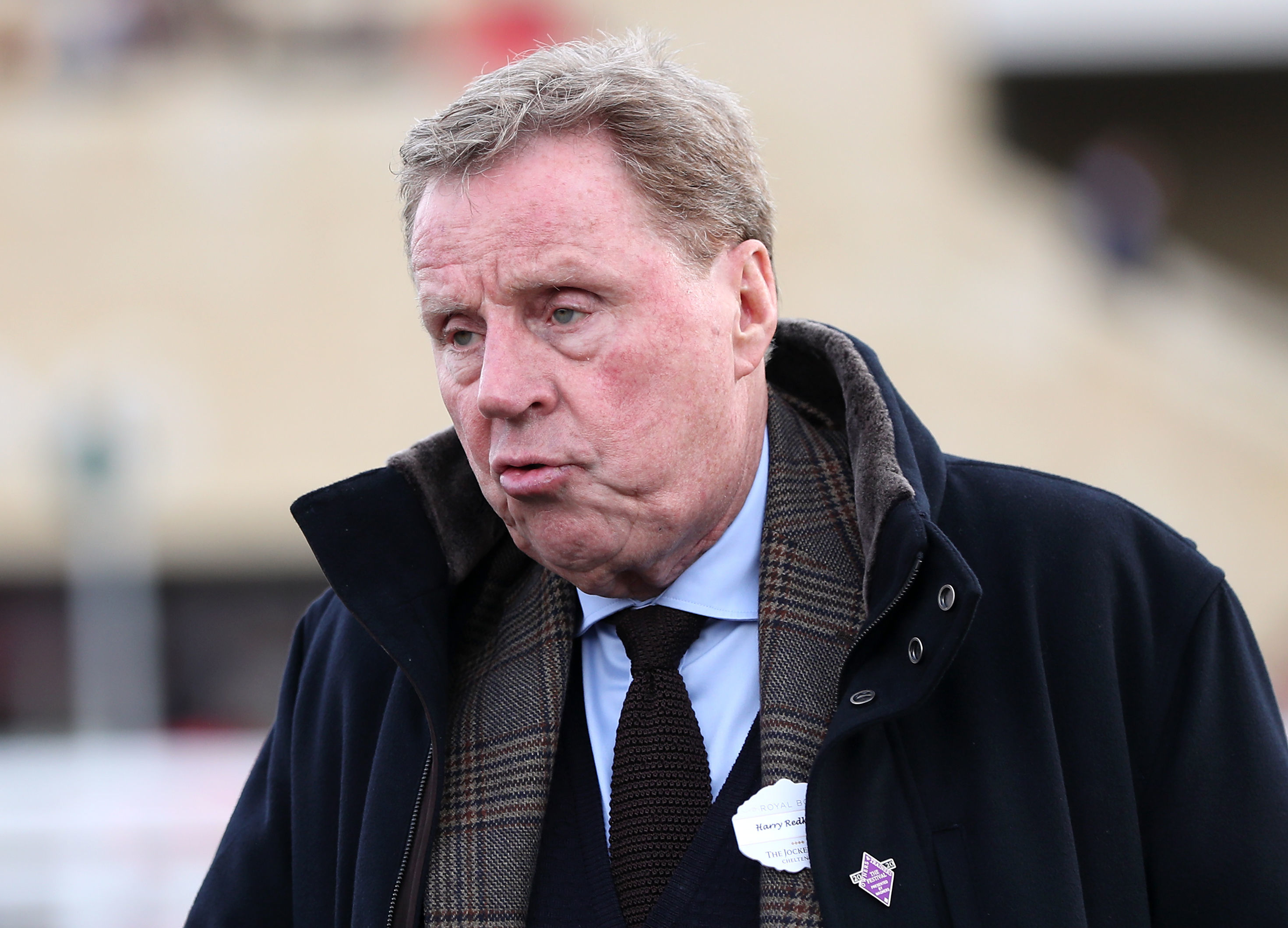 It looked like his wait could come to an end this afternoon with the well-fancied Back On The Lash in the Cross Country Chase but the marathon race was lost to frost.

Redknapp, 75, has had a lifelong love affair with the sport and he has plenty of good days as an owner, so he can wait a little longer.

The former Spurs, West Ham and Portsmouth boss is one of the game’s great supporters and is a regular at a number of racecourses across the south of England.

His interest in racing and betting was sparked when he was growing up in Poplar in the East End of London as a kid – though it often ended with his nan getting in hot water with the Old Bill!

He said: “I’ve always loved racing. My nan was a bookies runner when I was growing up in the East End.

“Some days I’d come home from school and she was being taken off in a Black Mariah to the police station because it was illegal back then.

“You couldn’t just walk down the high street and pop into the bookies – Cyril the paper boy used to be our local bookmaker.

“He’d stand on the street corner selling papers and taking bets, it was amazing how it used to work when you look back on it now.

“Betting shops used to be dark and smoky and you’d only have the commentary to listen to how your horse was getting on.

“But nowadays you can watch a race anywhere in the world on your phone.

“I still go racing whenever I can. I love going to Newbury and Exeter and Cheltenham, anywhere in the south.”

As for cross country specialist Back On The Lash, he could be the chosen one in Redknapp’s pursuit of a Cheltenham winner. He will be among the favourites for the unique race at the Festival in March.

Redknapp said: “It’s frustrating the race was called off because we thought he had a big chance.

“I spoke to Martin Keighley on Wednesday morning and he reckons he is in great heart at the moment.

“He likes it around the cross country, he won around there before I bought into him at the November meeting last year.

“I thought it was a great run when he was third last time, hopefully they reschedule the race for next month but he will definitely be back in the spring.”

He isn’t the only contender Redknapp will have at this season’s Festival.

His exciting novice chaser Bowtogreatness is highly touted, while his smart handicapper Shake’emupharry was an impressive winner at Exeter recently.

Both are trained by Ben Pauling who has been in flying form – and Redknapp revealed he also has a history of flying into a tackle.

He joked: “Ben is having a great run of form at the minute. Ever since he moved to his new yard he can’t stop having winners. He’s great fun and a good trainer and he loves his football.

“I managed him in a charity match raising money for the Injured Jockeys Fund a few years ago. He’s a bit wild, he kicked lumps out of everyone. If it moves, he will kick it!

“Ben has high hopes for Bowtogreatness, he is a horse we think plenty of.

“He was unlucky last time when he was second at Exeter, the line just came a stride too soon and I was gutted for him.

“Hopefully he can take another step forward because we think he is a nice horse.

“It was great to see Shake’emupharry win the other day as well. He is a horse with a big one in him.”

If any of his runners are on target, it will be a dream fulfilled.

He continued: “I’ve never had a winner at Cheltenham but, like everyone, it’s the dream to have runners and winners there.

“If you own jump horses that is where you want to go, it’s why you invest in the game to have runners at places like Cheltenham.

“I’ve had Festival runners before which is always a special day out. To have a winner there would be unbelievable.”

And it truly would be the perfect weekend if England can get past France on Saturday night.

Redknapp fancies the Three Lions to get past Kylian Mbappe and his pals – and can see them making it all the way to the World Cup final.

He smiled: “It’s going to be a tough game but I think France are a little suspect at the back and I think we will win 2-1.

“I fear Portugal, I tipped them up at the start and we would probably have to play them in the semis, but I think it could be an England versus Brazil final.

“If they can win on Saturday night and if I have a winner at Cheltenham, it would be the best weekend you could ask for.”

Advertisement. Scroll to continue reading.
In this article:harryredknapp, thisyear, worldcupglory