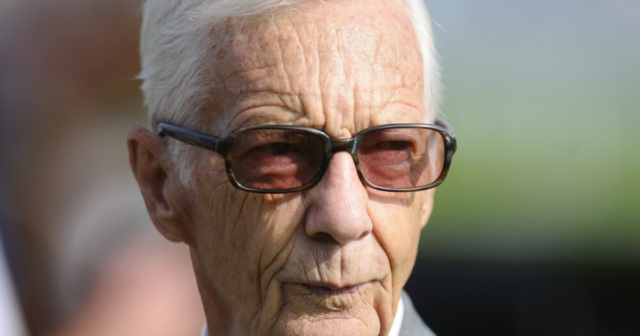 “HE’s a legend but sadly not immortal.”

Whatever else is written and said about Lester Piggott, those words posted to me by his daughter Maureen Haggas are the ones that will ring in most people’s ears.

It was a week last Saturday that Maureen messaged me while I was working at Haydock for ITV.

Although a statue of Lester was being unveiled in Ireland, Lester was back in Geneva, and word got through to me that he wasn’t 100 per cent.

So I messaged Maureen to get the latest and I’m sure she won’t mind me repeating what she sent back to me on WhatsApp.

Bear in mind the Haggas stable has been in corking form. “If it’s a case of some things going well that’s honestly all you can expect,” Maureen said.

“We are lucky the horses are going well. And we have another lovely grandchild.

“I will let you know if there is any change, but we must remember Lester is 86 and has given his body a beating since he was 12. He’s a legend, but sadly not immortal.”

Elsewhere in these pages you will read of Piggott’s great record in the saddle, the Derbys and THAT Breeders’ Cup on Royal Academy and how he wasn’t perfect. He went to prison, wrongly or rightly.

But I want to give you my experience.

I come from a non-racing family. I watched Piggott as a child and marvelled at his skill. His cheek. His strength. His timing. His sheer flair and that ability to get a horse to dig deeper than it had ever done before.

Piggott could have done anything in his life and owners would have wanted him. For to have Piggott on your horse was one thing. But the other was to not have him against you.

Piggott had retired when I started working in racing. But I got to meet him a few times and he’d always have a wicked glint in his eye.

Lester was also funny. He had a cracking sense of humour. Yes of course he was ruthless in the saddle. No prisoners. Winning was what it was all about.

But I imagine he was a cracking dad and grandfather. He might not have said much, but he would smile and when he did speak you listened with the intensity only few can garner.

The last time I saw Lester was at Ascot racecourse.

Now Lester watched everything on telly. Everything. he never missed a beat.

Anyway, Seb had never heard of Perry Como, who most intelligent people know sang Hot Diggity in the 1950s.

I could not believe this. Not knowing Perry Como is like not knowing The Beatles or Frank Sinatra.

So back to Ascot, and Lester pulled me to one side and said: “I can’t believe Seb hadn’t heard of Perry Como!”

I responded: “You know Perry Como?”

Goodbye Lester. I hope he knew how we respected and loved him.