Highest earning racehorses ever as Mishriff aims to go No1 with another £7.3MILLION payday in Saudi Cup
Advertisement 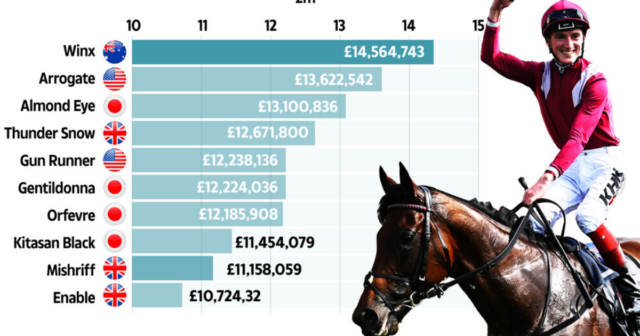 FROM a bog standard contest at Yarmouth and a cheque for £365.65 to the chance to become the highest earning racehorse ever – Mishriff’s rise is what every owner dreams of.

The John Gosden-trained five-year-old has turned into a walking cash machine for owner Prince Faisal in just over two years.

And he’s not done yet.

Mishriff has been entered to defend his crown in the Saudi Cup, the world’s richest race, next month.

Victory there – worth £7.3m – will make Mishriff the highest-earning racehorse ever.

Take into account how long he actually runs for on the track and that works out roughly as a ridiculous £420,000 per minute.

Not bad for a horse who in his first two races barely broke the £1,000 earnings mark thanks to fourth and third-placed finishes at Yarmouth and Newbury.

From humble beginnings in that Class 4 race in October 2019, where the winner went onto win just once more and pocket a paltry £34,093 in earnings, Mishriff blossomed into a bona fide superstar.

And he looks fully primed to eclipse Australian superstar Winx, who currently occupies top spot with £14,564,743 in career earnings.

Second spot goes to American runner Arrogate who retired with £13,622,542 in earnings.

While the best British horse is Thunder Snow, the Saeed bin Suroor-trained Godolphin runner who earned £12,671,800.

Mishriff will face stiff competition in his quest to go back-to-back, with the likes of Ascot Group 1 winner Sealiway also lined up.

Fan favourite Pyledriver is another of the 152 entries, while Breeders’ Cup hero Knicks Go could make the flight over from the US.

Marche Lorraine, who Oisin Murphy has steered to victory, is a notable entry from Japan.

Tom Ryan, director of strategy and international racing at the Jockey Club of Saudi Arabia, said: “We couldn’t be happier with the entries for the meeting.

“Not only do we have a huge number – over 300 more than last year – but the quality is exceptional with 71 individual Group 1 winners and last year’s Saudi Cup winner Mishriff.”

Mishriff will have some way to go before displacing the horse widely considered to – unofficially at least – be the highest-earning of all time, though.

Some estimates put Galileo’s net worth at £1billion at the time of his death last July.

The Coolmore goliath raked in millions and millions at stud, reportedly charging £600,000 a time to cover a mare.