Highfield Princess takes her earnings past £500,000 after big Group 1 win in France
Advertisement 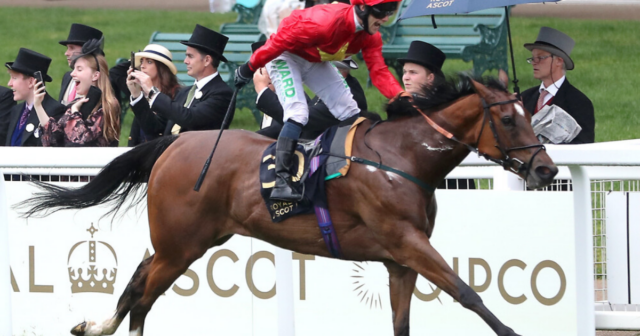 HIGHFIELD PRINCESS got her hands on the French sprinting crown at Deauville.

She bagged the Prix Maurice de Gheest under a power-packed Jason Hart – giving both horse and jockey a first Group 1.

Her brave, front-running win in northern France, against a field of top-class sprinters, capped the five-year-old’s incredible rise through the ranks.

A little under two years ago she broke her maiden at Ayr off a mark of 58 – now she is one of the top sprinters around and has banked over half a million quid.

And the John Quinn-trained mare did it the hard way under Hart, 27, who has also established himself as a top-flight jockey over the last couple of years.

She went forward early alongside Japanese runner King Hermes, but she faced challengers from every direction as they entered the final couple of furlongs.

But she fought them all off and was a length clear at the line, with the usually ice-cool Hart visibly fired up as he passed the winning post.

It was a British 1-2-3, as Owen Burrows’ Minzaal and the Charlie Hills-trained Garrus filled the places.

Richard Fahey’s star three-year-old Perfect Power, who flopped in the July Cup, was again a big disappointment and now has a point to prove.

But the day belonged to another Yorkshire-trained horse in Highfield Princess, and winning jock Hart grinned: “She is so tough, what a special mare.

“The boss had his eye on this race for her as soon as she crossed the line at Royal Ascot.

“She had a small break afterwards and when the boss targets a race it normally pays off.

“We didn’t go very quick which helped us, I was in the right place to attack. When you go for her she can wander around but she was well on top at the finish.

“These are the races everyone wants to be riding in and winning. I have had a couple of near misses but it is amazing to come here and get a Group 1.

“She is owned by John Fairley, who is John Quinn’s landlord, so it’s good to keep the bosses happy!”

Highfield Princess has several options now, including the Nunthorpe Stakes at York next week.