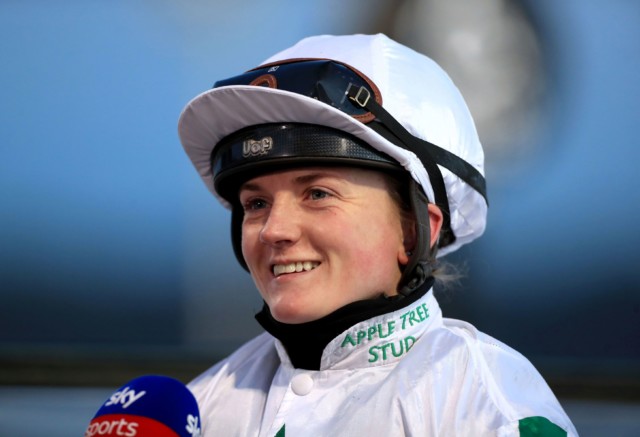 Doyle, 24, could become the first female to ride a Classic winner in Friday’s Cazoo Oaks at Epsom.

Doyle has ridden 12 winners so far this season

And last season’s sensation admits she has been inspired by Blackmore and Frost after their exploits over the jumps this winters.

Blackmore made history when winning the Grand National after Frost triumphed in the King George at Kempton.

Doyle, who last year was third in the BBC SPOTY awards after a season that saw her win her first Group 1, rides Sherbet Lemon in the Oaks for Archie Watson.

She said: “It’s great to get the ride. That was the aim at the start of the year to continue to ride plenty of winners but at the same time to try and get some good rides in good races. To get a ride in the Oaks is great.

“It would be the biggest winner of my career I suppose to win a Classic. It would be amazing and definitely the next step up.

“I suppose I look up to the likes of Ryan Moore and people like that but when other females in racing achieve things like Rachael and Bryony, it makes you believe that these sorts of things are possible.

“Hopefully what I do can help inspire others by setting a good example.”

Sherbet Lemon thrust into Classic contention after bouncing back to winning ways with victory in the Lingfield Oaks Trial last time out, and although Doyle was not on board on that occasion she was impressed with what she saw.

She added: “I won first time out on her at Newcastle and though I’ve not sat on her on the racetrack since, I do most of the work at home on her so I know her really well.

“I couldn’t ride her when she won the trial that day at Lingfield but I was delighted for the whole team that she got the job done that day. I’ve galloped her since and she has really improved.

It was a really good performance and she pulled it out of the bag. She was a bit green late on so there is plenty more to come.

“Obviously we are all there to try and win the race but I hope she can finish in the top five or six. At the end of the day it would just be great to see her run well.”

Helping Doyle hit the heights she has enjoyed in recent months has been the backing she has received from Sherbet Lemon’s trainer Archie Watson, who she has plenty admiration for.

Doyle said: “If she was trained by someone else and won her trial she would have probably nearly been favourite and not a 25-1 chance but Archie is a trainer on the up and it is great for a ride like this to have come from him.

“He does really well with what he gets and we have got some nice horses as well that will see towards the middle to the back end of the year come out.

“We are getting sent some quality horses which is good. Everyone at the yard is excited as everyone loves that filly which is great.”

Stablemate Snowfall is 4-1 with the Roger Varian pair of Teona and Zeyaadah at 6-1. Sherbet Lemon is a 33-1 outsider.

Advertisement. Scroll to continue reading.
In this article:Epsom, Lingfield, Newcastle