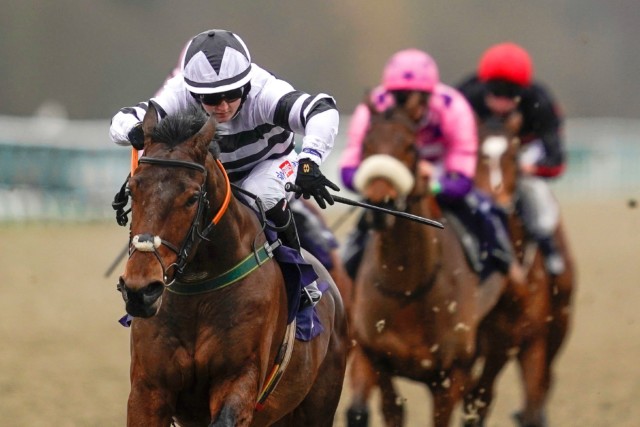 HOLLIE DOYLE rode her 150th winner of a record-breaking 2020 just two days after coming third in the BBC Sports Personality of the Year award.

The ‘pocket rocket’ jockey, who stands just 5ft tall and weighs 8st, crossed the line first on Darwell Lion at Lingfield – before bagging her 151st winner a couple hours later.

Doyle’s landmark winner comes after she already broke the record for most wins by a female jockey in a calendar year.

And she appeared to realise the enormity of what she had achieved when speaking after victory on the 4-1 shot.

“I didn’t think it would happen this year.

“The Group 1 on Glen Shiel on Champions Day was the biggest highlight, and hopefully it will open a few doors for the future.”

Quizzed how she can top an unbelievable 12 months and whether she has what it takes to be crowned champion jockey, Doyle – who once swallowed two teeth in a horror fall – replied: “I’ll give it a go and try as hard as I can.

“Hopefully I’ll be in that position one day, whether it’s next year or the year after. I’ll keep trying as hard as I can.”

It was back in October that 24-year-old Doyle smashed her own record for most winners.

Away and gone! @HollieDoyle1 lands a @LingfieldPark double as Kendergarten Kop hoses up in brilliant style for David Flood… pic.twitter.com/5ZKPaCn1Dy

She took her tally to 117 after winning on State Occasion at Kempton.

But that total trails way behind – like most of her rivals now.

Doyle’s Group 1 winner on British Champions Day at Ascot was a clear highlight of the year.

As was the incredible 899-1 five-timer at Windsor.

Doyle, who dates fellow jockey Tom Marquand, burst onto the national conscience last Sunday with her third-place finish in SPOTY.