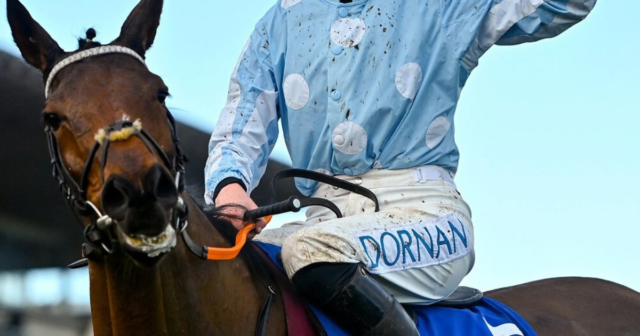 HONEYSUCKLE should be so beatable in the Unibet Champion Hurdle, although not many of her loyal followers will appreciate it.

When a horse has a fan club, you open yourself up to all kinds of abuse suggesting such things. It’s the Winx thing. Remember her?

Honeysuckle is undoubtedly really, really good – but we’ll only know is she’s legendary when she smashes up a world-class rival

But reality has to set in eventually.

Honeysuckle, the darling of Irish racing, has been an absolute monster to rattle up fourteen consecutive wins for trainer Henry de Bromhead and has been superb for jockey star Rachael Blackmore.

But she’s been more lucky than I can tell you with the horses she’s faced along the way. Oh yes, and the 7lb she receives.

Some of the huge names Honeysuckle has beaten include Moskovite, Sassy Diva, Western Victory and Elfile. Many of you won’t have heard of those – EVER!

Yes I know, she’s also seen off Easy Game, Bacardys, Benie des Dieux (arguably should have won), Ronald Pump, Abacadabras, Sharjah and Zanahiyr. But they are hardly world beaters are they?

The simple truth is this. Honeysuckle hasn’t faced anything like a top-notch hurdler.

That is not her fault. And her will to win is incredible.

But we can only really say she’s a legend when she has a talented performer to smash up.

It’s not just me saying that by the way.

To compare, hurdling giant Hurricane Fly was a top-rated 175, and the awesome Faugheen ‘the machine’ 174.

Meanwhile Honeysuckle, who will always struggle for a high mark with her allowance, has a rating of 165.

WILL HONEYSUCKLE APPRECIATE THE CHALLENGE?

She was left unchanged after her success in the Irish Champion Hurdle last weekend.

On that basis, it’s no surprise Ireland’s champion jockey Paul Townend is itching to have a crack at Honeysuckle with Appreciate It, the Cheltenham Festival bumper runner-up in 2020 and stunning Supreme hero in 2021

Townend said: “He [Appreciate It] is the horse with all the potential. We don’t know how good Honeysuckle is but I’m looking forward to having a go at her with something on a level that Appreciate It shows.”

The problem, of course, is that Appreciate It has been off the track since that Supreme success nearly a year ago.

But I’m confident he’ll be in the Champion Hurdle line-up. And, if he is, well Honeysuckle might find things a bit sticky.

Added to that, his trainer Willie Mullins is not bad at judging a Champion Hurdle winner.

I hear some of you shouting that’s all well and good, but was the form of last year’s Supreme up to much? Good question.

At face value a defeat of Ballyadam – poor now – and For Pleasure is hardly earth-shattering, but back in the pack Soaring Glory, Metier and Blue Lord (fell when stuffed) were thrashed.

Appreciate It is a great big beastie thing who might still improve.

I remember Cyborgo winning the Stayers’ Hurdle first time out for Martin Pipe. It can be done.

Mullins has a strong line on the form through Sharjah, and the 5-1 on offer might just look huge on the day.

But it’s doubtful that will happen after the Betfair Denman and Game Spirit Chase.

The Denman features the Paul Nicholls-trained former King George winner Clan des Obeaux, and his trainer has taken this ten times since 2000.

I suspect he will beat Royale Pagaille, who would only come in the Gold Cup picture if the ground was heavy.

The Game Spirit is a weak renewal, and for that reason I suspect the honourable Sceau Royal can steal the prize for the second year in a row.

He has been a little star for Alan King.

As for a big handicap, well all eyes are on the Betfair Hurdle shown like all the major Newbury races on the main award-winning ITV network.

It’s a wide open renewal, and my pin has fallen on Boothill, who returned with a fine third at Ascot behind Soaring Glory before flopping in a chase.

Trainer Harry Fry has had a better season and Boothill – ridden by Sean Bowen – must have each way claims.

It’s a Saturday to savour. So just Appreciate It!