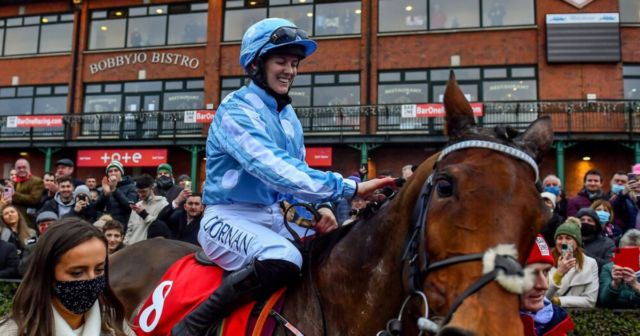 I mean we know she’s not very good, as the powers that be insist she gets a 7lb allowance.

Honeysuckle is simply awesome – so why does she need to have a weight allowance?

Surely you only give an allowance in sport to anything or anyone who is inferior?

On that basis, we all know Honeysuckle – who demolished the field at Fairyhouse – is not that special.

Hold on, but Honeysuckle is special. In fact she’s so special she’s unstoppable. She’s a Champion Hurdle winner.

I wonder what the colts and geldings make of taking her on at such a disadvantage simply because she’s female.

Yes I know this is an old drum I’m banging, and I also know professionals in the game – who take any opportunity to get an easy win – will say she’s the exception to the rule.

But she’s not an exception to the rule. It’s nonsense.

Times change. Training gets better. More female horses are racing than ever before.

So I cry out once again for those in control of this sport to change the sex allowance.

Not in every race. But just in a handful of championship events on the Flat and over jumps.

In those races every horse runs off levels. Stop this nonsense. Let’s find out who is the best horse.

So, a call to all Flat trainers. If you have a decent gelding with a high rating on the level seriously think about being a hero and doing an Alderbrook.

The Champion Hurdle market is totally one sided and most of the market rivals to Honeysuckle won’t take part.

This is the season to take a chance and see if your talented performer can jump a hurdle.

There is nothing to lose and everything to gain.

On Monday, opening arguments are expected to be made at the High Court as Freddy Tylicki sues Graham Gibbons over the 2016 fall at Kempton that ended his riding career and left him paralysed.

Tylicki will seek to persuade a judge that Gibbons owes him damages, having allegedly caused the fall by steering his mount across in front of Tylicki’s, who then clipped heels.

I have always been a huge supporter of Freddy and if he wins I’ll be jumping up and down with joy for the lad.

But it will be a hard case to convince those adjudicating.

Why? Well mainly because the stewards on the day said that nothing wrong happened.

That means Tylicki has to convince the panel the stewards did not do their job properly.

The report read: “Having heard their evidence and viewed recordings of the incident the Stewards found that the falls were caused by Tylicki clipping the heels of Madame Butterfly and Nellie Deen falling, which in turn resulted in the falls of Electrify followed by Skara Mae, followed by Sovrano Dolce. Being satisfied the incident was accidental, the Stewards took no further action and ordered the placings to remain unaltered.”