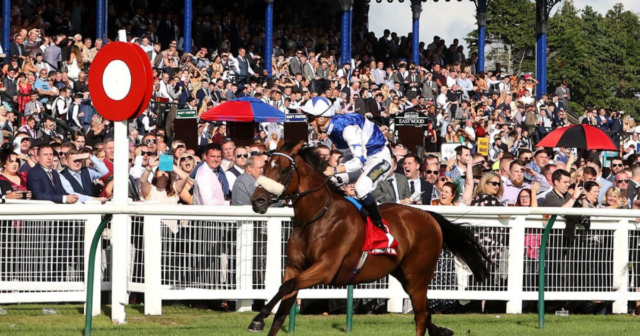 BRILLIANT Kevin Stott punched the air as he won the Ayr Gold Cup on Bielsa.

The jockey defied the odds ploughing his own furrow up the nearside rail as the rest of the field charged up the centre.

Kevin Ryan’s consistent six-year-old took his spoils of the £150,000 pot to deny the well-punted favourite Great Ambassador who raced on the opposite rail.

Not unsupported himself, Bielsa – named after the Leeds United manager – was sent off at 15-2. Mr Waggyu was third at 18-1 with Motagally a place further back.

Owned by King Power Racing, it was a first win in over two years for the gelding. As the old saying goes, good things come to those who wait.

Ryan, who celebrated his fifth win in the famous handicap, said: “I spoke to Alistair Donald the racing manager for King Power this morning and said ‘we’re on the rail, it’s fresh ground, and he likes to go that way anyway’.

“It’s great to train a winner like this for King Power. They’ve been very patient with this horse and I’m chuffed really.

“He’s a very talented horse. It just hasn’t happened this year. Things go wrong and you get little niggles, but that’s what gets you an Ayr Gold Cup – they generally get there fresh and well.

“We’ve won four Ayr Gold Cups and you wonder if you’re going to win another one.

Down at Newbury it was trainer Clive Cox who smiled widest as his Wings Of War (17-2) took the feature Group 2 Mill Reef Stakes.

His juvenile is the latest sprinter to come off the end of Cox’s formidable production line.

Cox, who won the race with the brilliant Harry Angel in 2016, said: “We’ve loved him from the start but they’ve always got to go and do it. He showed a bit of greenness in his last couple of starts but that was really good and Adam gave him a super ride.

“He was good and he was ready for this test. I just hope and pray he turns out as good as our last winner of this race. That would be nice.”

The admirably consistent Wings Of War lands another Group 2 Mill Reef Stakes for the Adam Kirby and Clive Cox partnership, running on strongly to reel in the very game Hierarchy who had attempted to make all of the running @DubaiDutyFree | @NewburyRacing pic.twitter.com/9akxHBfVNU