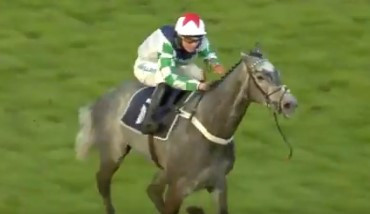 JAMES BOWEN survived a double scare to ride home a miraculous winner on an unsteerable horse.

Bowen managed to get Mot A Mot to win the last at Chepstow despite his rein breaking only 40 seconds in to the race!

Bowen managed to cling on with just one hand throughout

The 18-year-old was left to ride one-handed most of the way, with his loose hand trying to grip on to the horse as best he could.

But with the added freedom, Mot A Mot was determined to make life as tricky as possible for his rider.

The commentator said: “There seems to be some sort of issue with the leader who is hanging badly around the turn. He’s giving James Bowen more than a few problems!”

And if that wasn’t already tricky enough for the 18-year-old, while looking round to keep an eye on his rivals, he nearly went straight into the last hurdle.

Sky Sports Racing pundit Mick Fitzgerald was quick to heap the praise on the young rider, with others calling it the ride of the season.

Fitzgerald said: “The rein is flapping down! That was so close to going horribly wrong.

“But not a bit of it, that was absolutely brilliant riding from James. Well done him.”

And punters were quick to take to social media to praise Bowen.

One said: “Just getting the horse round the bottom bend looked hard enough but then to ride a race and win, brilliant James.”

Another said: “The balance and core strength needed to do this must be incredible. He made it look easy.” 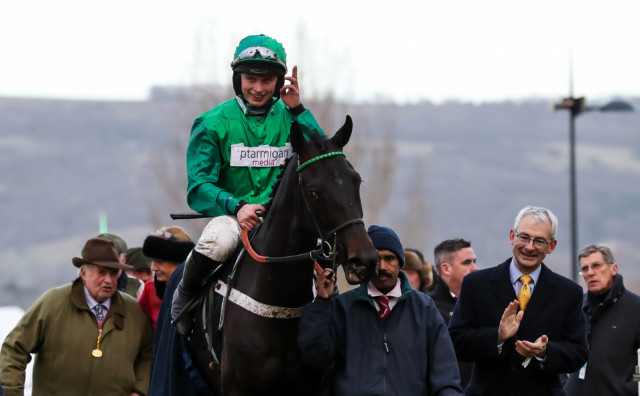 Bowen has ridden plenty of big winners for Nicky Henderson

It’s not the first amazing winning ride the racing world has seen in recent days.

Just on Sunday Hugh Morgan produced an even more stunning effort to win at Navan.

Morgan’s stirrup broke after a close escape at the very first hurdle and somehow he managed to ride the entire race afterwards.

Did you miss our previous article…
https://www.sportingexcitement.com/horse-racing/grand-national-will-not-be-delayed-as-aintree-boss-refuses-to-cave-to-demands-to-change-original-april-10-date

In this article:Aintree, Chepstow, Navan