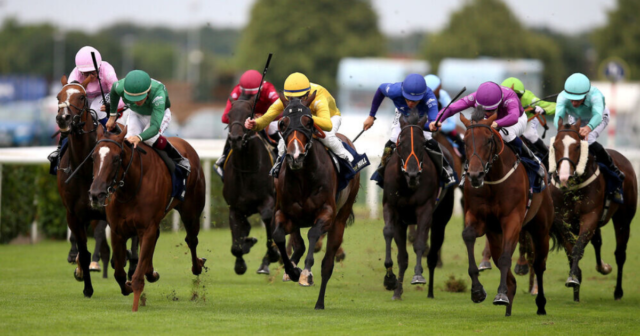 THE Racing League has been given a huge boost after ITV agreed to broadcast the £2million series.

This year’s competition will be jointly aired on ITV4 and Sky Sports Racing when it begins at Doncaster on August 4.

All licenced racehorse trainers have been encouraged to register their interest in representing one of the seven regional teams taking part this year.

The Racing League will be back with a bang in 2022

Big names like Frankie Dettori and Hayley Turner were among the jockeys who competed last season.

Sky Sports Racing had the likes of cricket legend David ‘Bumble’ Lloyd on the DJ decks as part of their coverage.

Now the competition will reach a terrestrial audience thanks to ITV.

Jeremy Wray, Racing League CEO, previously promised the competition would be back ‘bigger and better’ in 2022.

And speaking of the new TV deal, he said: “We are delighted to confirm this broadcast agreement with ITV Racing to bring the Racing League live to terrestrial television, which we see as an excellent next step for the competition.

“Sky Sports Racing have, of course, been a hugely important partner in establishing the Racing League, and we look forward to also continuing our association with them and their team over the course of this year.”

Niall Sloane, ITV Director of Sport, added: “ITV Racing are delighted to be able to bring free to air coverage of the Racing League to a terrestrial audience.

“We look forward to working with the team and the participating racecourses across the late summer to help widen the appeal of the competition in its second year.”

Team talkSPORT took the inaugural points-based title last year, with victory coming on the final night of racing at Newcastle.

Racing League nights will be held every Thursday evening through the summer at Doncaster, Lingfield, Newcastle, Windsor and Southwell before it returns to Newcastle for the big finale.