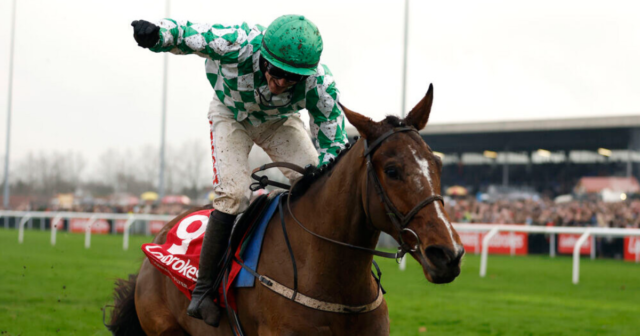 HUGE outsider TORNADO FLYER blew away all his rivals to win the King George at giant odds of 28-1 after a dramatic last-fence fall.

Willie Mullins is used to winning with favourites but it was the genius Irish trainer’s second string who scooped British racing’s biggest prize.

Tornado Flyer was a shock 28-1 winner of the King GeorgeFergie was celebrating a share of a cheque for £50,000 after his horse finished second

It looked like his main hope 6-1 Asterion Forlonge would arrive late to nab the £142,375 first-place prize, only to fall at the final fence.

Jumping continues to marr the grey’s reputation, who looked like having a good to chance to win the star-studded John Durkan Chase at Punchestown earlier this month before falling again.

His blunder at Kempton paved the way for Tornado Flyer to power home under jockey Danny Mullins.

Sir Alex Ferguson was celebrating a share of a £53,425 cheque after Clan Des Oebaux, the horse he co-owns, finished second at 7-2.

Jockey Mullins said his horse’s win was not a shock to those who know how he can run.

He said: “I didn’t think he was totally out of it.

“This is as competitive a race as has been run in England all year and this lad’s always had the promise to deliver something like this.

“I knew he had a squeak and going away from the stands the second time I was starting to come alive.

“Going down the back I was able to just keep taking him back and filling him and even at the last on his own he was probably idling.

KING GEORGE: How every horse finished

“I wouldn’t have minded Asterion Forlonge getting to me as I think I had a little more left but I was happy enough.

“When you’re riding for Willie [Mullins, trainer] you’ve always got a chance, no matter what price they are. They’re always there with a right chance.

“2021 has been a fantastic year for me, I’ve had multiple winners at the big festivals, a Cheltenham Festival winner, to cap it off with a King George is great. It’s one of the races of the season.”

In this article:Cheltenham, Cheltenham Festival, Punchestown