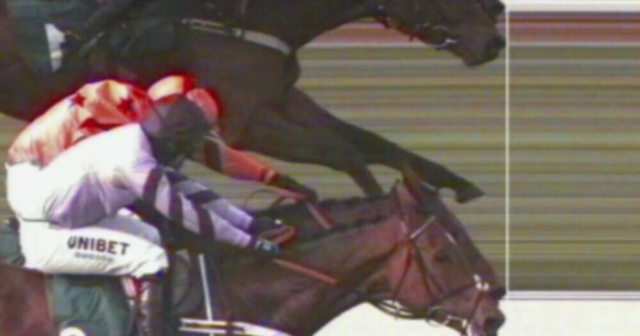 A HUGE photo finish controversy sent punters and owners on an emotional rollercoaster at Warwick.

Stewards needed 34 minutes to determine exactly what happened and who had won the 2m 3f Novices’ Hurdle race.

In between that pair was Paul Nicholls’ 2-1 shot Complete Unknown.

The tight finish went to stewards straight away so they could determine in detail who was the winner and whether any interference changed the result.

Initially, Unanswered Prayers, in the orange silks with black stars, was named first past the post.

But after more than half an hour – and at the expense of the next race starting on time – Unanswered Prayers was disqualified and Blue Stello named the winner, with Complete Unknown in third.

A statement read: “Following a stewards’ enquiry, Unanswered Prayers, who passed the post first, was disqualified and placed second.

“Blue Stello was awarded the race.”

Fortunately some firms paid out on the first past the post and the official winner.

But there was no such luck for connections of Unanswered Prayers, who went from thinking they had the winner and a £4,084 prize to second and £1,882.

Speaking of his eventual winner, legendary trainer Henderson said: “That’s as fast as he’s ever been in his life I imagine.

“Win, lose or draw I’m very pleased with the horse. Sure he’s won now – and you’d say he’s come on enough to win next time – but he’s won.

“I feel sorry for the runners up, you wait ten minutes to get result, you think you’ve won and then you’ve got it nicked off you again.

“I think we both would have settled for a dead heat.

“All three horses were involved, it’s a question of who did what to who.”

Punters were split on the result, once it was finally announced.

Another said: “I’ve backed Blue Stello but there’s no way the interference made a difference there. Unanswered Prayers is so unlucky there.

“Every angle I’ve seen is a dead heat. How the original result was given one way I’ll never know. It should be a dead heat nothing else.”

A fellow punter wrote: “I backed Unanswered Prayers and even I think that’s a dead heat if not Blue Stello.”

While one comment read: “How the race at Warwick isn’t a dead heat I’ll never know.”