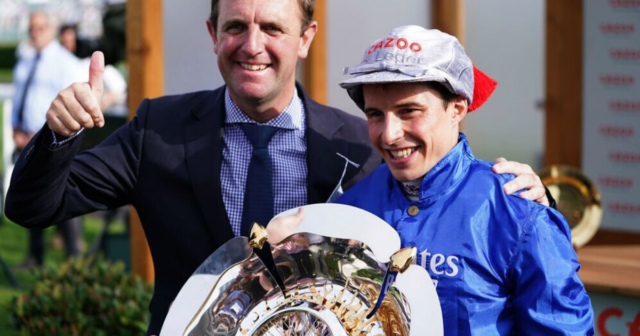 HURRICANE Lane made landfall in the St Leger at Doncaster and left his rivals battered and bruised.

It’s rare to see a Classic won without a fight – though in fairness resistance would have been futile against Charlie Appleby’s force of nature.

He was in a league of his own and could now be on a collision course with Derby-winning stablemate Adayar in the Arc.

Appleby will let the dust settle before making that decision, and when you have an embarrassment of riches like he has you can afford to take your time.

Jockey William Buick was similarly patient in the St Leger itself, as he allowed the 8-11 favourite Hurricane Lane to bowl along near the rear of the field.

Mojo Star (8-1), who finished one place ahead of Hurricane Lane when second in the Derby at Epsom, made his bid for glory around two furlongs from home.

But Hurricane Lane was always breezing along merrily and as soon as Buick pushed the button the response was instant.

He won by two and three quarter lengths eased down from Mojo Star, with The Mediterranean (28-1) fairing best of Aidan O’Brien’s four runners in third.

Appleby said: “It was the dream race, it was very comfortable all the way around and it all went very smoothly.

“He has a great turn of foot for a staying horse and he has improved beautifully through the season.

“He has given us a couple of days at home where he has challenged us, he is a bit of a boy in the mornings.

“We will take our time before making our decision. But I don’t see any reason at the moment why we wouldn’t turn up (in the Arc).”

Ladbrokes trimmed him into 6-1 from 7s for the Arc – with Adayar a 9-2 shot – and if he does head to Longchamp it will leave Buick with a big decision to make.

He said: “Hurricane Lane is a jockey’s dream, he has impressed me so much this season.

“Him and Adayar are two fantastic colts, I’m incredibly lucky to be able to ride both of them.

“He has only just crossed the line in the Leger so will will take our time and enjoy today first and foremost.”

The highly-anticipated Champagne Stakes ended on a flat note as The Queen’s Reach For The Moon could only manage second place under Frankie Dettori.

The John Gosden-trained colt was touted as a major prospect for the 2022 Cazoo Derby off the back of an easy win in the Solario Stakes last time out.

But he suffered a surprise defeat at the hands of Roger Varian’s Bayside Boy (5-1), who led in the final strides to win by a head.

Reach For The Moon was pushed out to 16-1 from 10s with Ladbrokes for the Derby, with the winner introduced at 20-1.

Gosden said: “Frankie said the ground was just a bit on the dead side for him.

“It’s one of those things and he will probably have one more run this season – where I’m not sure.”