I downed wine and snorted cocaine before 6am every morning, I’d be dead if it wasn’t for fellow jockeys, says Alan Doyle
Advertisement 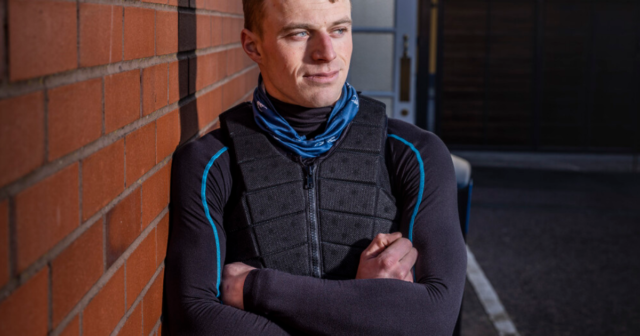 A LARGE glass of wine and a line of cocaine for breakfast, swigged and snorted by 6am at the latest.

That was the diet of destruction that had already killed Irish jockey Alan Doyle’s hopes of a career for more than a decade.

And came close to killing him too.

But now, 16 months clean, Doyle’s passion for racing and for life has been reignited by a move to Borders trainer James Ewart’s yard near Langholm last autumn.

The 28-year-old says a desperate call to the charity Racing Welfare in the summer of 2020 saved him from himself, after his addiction got so bad he turned all the mirrors he had around so he wouldn’t have to look at himself.

He told Sun Racing: “If I hadn’t contacted Racing Welfare I’d have died.

“Alcoholism had such a grip on me for 11 years that I’d reached the stage where I couldn’t go on any longer. I was suicidal.

“Making that call and admitting I was powerless to alcohol was a weight off my shoulders like you wouldn’t believe.

“Racing Welfare put me in touch with Sporting Chance, who got me a place on a rehab programme for sports professionals. I checked in on August 25, 2020 and spent 28 days there.

“The first week nothing was going into my head and I wondered if I’d get through it.

“But by the second week I started to find my spiritual side and began to open up about everything. It was tough, but those four weeks saved my life.”

Doyle’s battle with drink and drugs took root in 2009.

His first two rides as a 16-year-old on the Flat in Ireland were both winners, but the loss of some close family members and friends that summer hit him hard.

Doyle spent the next ten years running from his problems with a string of jobs on either side of the Irish Sea.

‘I HAD ZERO DISCIPLINE’

He even flitted to America on a whim for a brief stint as a work rider following a run-in over his drinking with legendary late Irish handler Dessie Hughes.

Doyle, who grew up near the Curragh in Co Kildare, added: “I worked for some great people, like Nicky Henderson, Sir Anthony McCoy, Joseph O’Brien and Dessie, who’ve all done amazing things.

“Sir Anthony has achieved everything I ever dreamed of as a kid. He looked after me when I worked for him, yet I had absolutely zero discipline or dedication.

“I’d wake up and all I could think about was getting to the pub and getting bladdered.

“When Covid hit, all the horses at AP’s pre-training yard went out into the field, so he got me a job working for Owen Burrows in Lambourn.

“But places like Lambourn and Newmarket, where I had a short time with John Ferguson, have a social scene that brought out the worst in me.

“During the first lockdown my addiction got really bad. I was using alcohol and cocaine on a daily basis.

“The first thing I’d do was drink wine and snort a line of coke by 5.30am, 6am at the latest. I was so addicted my body wouldn’t function without them.

‘COULDN’T BEAR TO LOOK AT MYSELF’

“I became paranoid, depressed and my anxiety was so bad I could barely leave the house. I was completely insane.

“I even turned over all my mirrors because I couldn’t bear to look at myself for what I’d allowed alcohol to do to me.

Doyle quit riding for two years in early 2019 after opportunities dried up.

But a rule change to allow jockeys over the age of 26 to still claim a weight allowance gave him renewed hope for a comeback.

He will forever be indebted to a whole host of good Samaritans who’ve helped him to turn his life around in recent months.

Among them are fellow jockeys Daryl Jacob and Brian Hughes, his coach Brian Harding, agent Richard Hale and the Ewarts.

Doyle said: “I owe everything to these people, because they are making all of this happen for me.

“But there are also so many others behind the scenes who’ve been just as supportive and influential.

“Daryl has become a very close friend, someone I really trust. We speak almost every night. He talks me through replays of my rides and gives me feedback.

“He has a big say in everything to do with my career. When I told him in August that I had to get out of Lambourn, Daryl, Richard and Brian Hughes all agreed that going to James’ yard would be a good fit for me.

“James and his wife Briony have been brilliant, as have the whole Ewart family. They’ve made me feel so welcome. Dianne Sayer is also good at supporting me with rides. Iain Jardine too.

“Langholm is a quiet, rural place. My only neighbours are two mountains and some sheep! That’s perfect for me because there are no temptations, no distractions. I can just focus on riding.

“I’ve got a hunger for racing now like I’ve never had before. And a quality of life I didn’t think was possible.

“I feel very lucky to be in this position of getting a second chance. All I want now is to give it my best shot at making the most of it.”

Advertisement. Scroll to continue reading.
In this article:Curragh, Newmarket