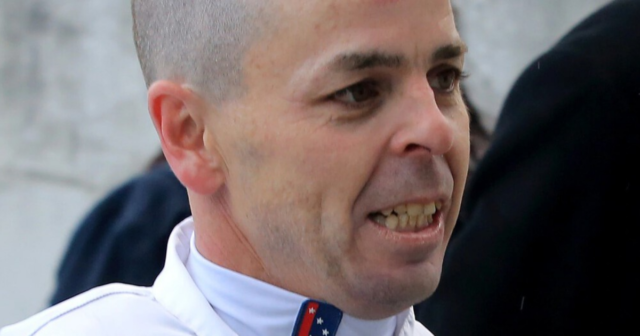 A JOCKEY shed almost 3st in three weeks by eating nothing but ice cream as part of his drastic body transformation.

Morris was retired at the time the pair went to the racecourse and had a few punts.

After backing one too many losers, Morris hit out at one of the jockeys – prompting Johns to challenge him to return to the saddle.

Determined to win some cash off his mate and shut him up for good, Morris said ‘you’re on’ to the bet and got about getting fit.

Eating nothing but ice cream he went from 11st 5lbs to 8st 7lbs in under a month.

Morris, 43, told racing.com: “We were sitting there, I didn’t have a riding licence at the time, and we were having some bets and I was complaining about one of the rides.

“He looked at me and said, ‘look at you sitting there saying that, you couldn’t ride it any better’.

“I was pretty keen to get his cash so that’s when I started to get back into it.

“I was doing a bit of boxing and a lot of walking.

“I lost 18kg in a few weeks. All I ate was ice cream for three weeks. That is literally all I had, I only ate ice cream.

“I was back riding not long after that, so I got his cash.”

The jockey, who has 334 career wins and has earned connections just under £3million in prize money, now has the chance of the biggest win of his career on Saturday.

He will line up on outsider Mishani Spartan in the £1.3m Magic Millions 2YO Classic at Gold Coast Turf Club in Australia.

Jockeys have to exist on strict and meagre diets in order to keep as light as possible.

Nicola Currie revealed there are some days she won’t eat anything at all in a bid to make weight for an upcoming ride.

Speaking while competing at Royal Ascot last year, she said: “If I had been coming up to these races a bit heavier I wouldn’t have been able to eat anything today.

“Luckily I had some yoghurt this morning – with a 30-minute run on the treadmill to work it off.

“But there are a lot of days where I won’t have anything to eat.

“I’ll maybe just have a sip of water or a cup of sugary tea before going out to ride to give you that energy boost.”

While Frankie Dettori turned 50 in remarkable shape thanks to a diet which included half a Mars bar.

Did you miss our previous article…
https://www.sportingexcitement.com/horse-racing/cheltenham-festival-gordon-elliotts-five-best-runners-ranked