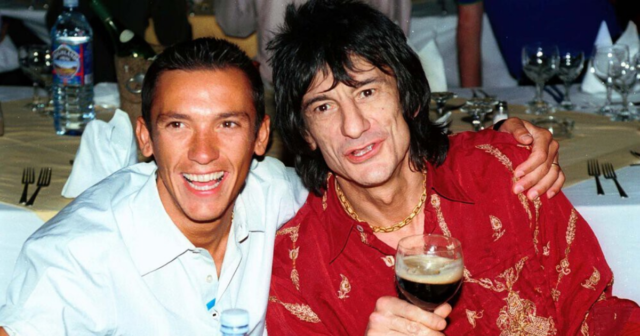 WHETHER it was fast horses or even faster cars, jockey Frankie Dettori admits he was into everything as a youngster and always “F***ing jumped straight in – with two feet”.

The Italian racing supremo confesses that even at 15 he was going to the pub and chasing girls, and was on a path that led to being busted for cocaine at 22.

Frankie Dettori had plenty of wild nights in his heyday, including booze ups with the Rolling StonesThe jockey was into everything, whether it was fast horses or fast cars 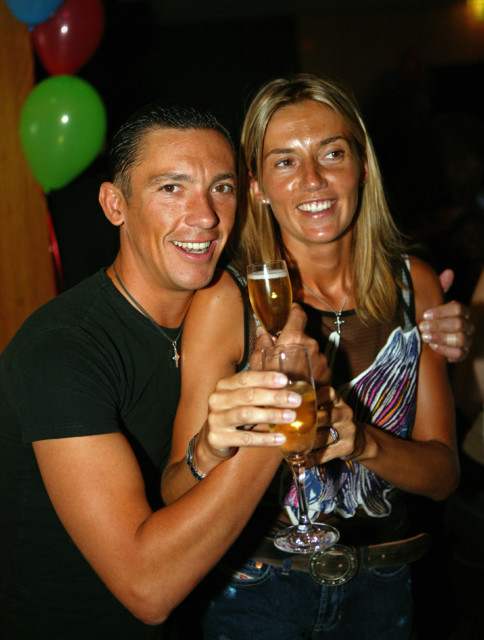 Now a 50-year-old elder statesman of the weighing room and a doting father of five, Frankie recalls a particularly crazy day that could have derailed his glittering career before it had barely got going.

It was April 18, 1993, and his beloved Arsenal were playing Sheffield Wednesday in the Coca-Cola Cup Final at Wembley.

With his face painted red and white, he set off from racing HQ Newmarket, in Suffolk, with a gang of friends in a minibus piled high with cases of beer.

On the way, Frankie says he “scored some speed”, or amphetamines, from a man in a service station loo.

The jockey, whose autobiography Leap Of Faith is out today, says: “Then I went to the football and got even more pd.”

But instead of returning home to Newmarket after Arsenal’s 3-1 victory, Frankie and two friends decided to celebrate in London, buying some cocaine in the toilet of a nightclub near Oxford Street.

He says: “I thought it was a good idea to take it in an alleyway outside the club.

“I must have been caught on camera, because before I knew it, a police car came, they searched me and arrested me.”

A day earlier he had ridden a winner for the Queen. Now he feared being her guest in one of her prisons.

Although Frankie was let off with a caution, it cost him a £200,000 racing contract in Hong Kong. Born Lanfranco Dettori in Milan in 1970, he is the younger of two children.

Dad Gianfranco was Italy’s champion jockey and mum Iris Maria was a circus trapeze artist who could stand on two trotting horses at once, one foot on each.

Young Frankie first dreamed of becoming a petrol pump attendant, then a footballer, before following his dad into racing.

Famed for his trademark flying dismount, he is now reportedly worth £14million.

But at the age of 14 he had arrived at Luton Airport with £366 in his pocket and no English. Homesick, he cried himself to sleep each night after taking his first job with Newmarket trainer Luca Cumani.

He was nicknamed Frankie after the other stable lads found Lanfranco too much of a mouthful. He lodged at a B&B in the town, where the first meal he was given was ravioli, to try to make him feel at home.

He recalls: “It was tinned ravioli. They had tried their best but it was horrible.”

Rising at 5am every morning to muck out three horses, he was paid £87 a week.

Away from his parents’ watchful eyes, Frankie threw himself into Newmarket’s social life. And because jockeys tend to be short, it wasn’t difficult for a 14-year-old to get served in pubs.

He remembers: “We went out as a group because we worked in the same stable. We were like a family.

“We didn’t have a care in the world but getting our wages on a Friday and going out on Friday and Saturday night. I grew up very quickly. The hormones kicked in at 15, and I was going to the pub and chasing girls.”

A natural horseman, Frankie rode his first winner at 15 and was champion apprentice by 18.

In 1990 he became the first teenager since the legendary Lester Piggott to ride 100 winners in one season. He became Cumani’s coveted stable jockey but now admits he was too young to cope with the success.

He says: “It was too much, too young for me to handle. By the time I was 19, 20, I had a blue Mercedes with black tinted windows and the spoilers, the stereo flat out.

“I had an entourage and my own flat. I was it. I was the man. I wish my success had come later. It came a bit too quick and went to my head.”

When Lester Piggott returned to the saddle, aged 55 in 1990, after time in jail for tax fraud, he tried to bring the young Italian down to earth.

A smiling Frankie says: “When Lester came back everybody was so frightened of him, because they remembered how ruthless he was.

“And I used to rip him to shreds, taking the p out of him all the time, saying he was an old man and he should be in a museum.”

The pair were racing at Goodwood and were furthest away from the stands when Lester got his own back from the saddle.

Frankie says: “He grabbed my b***ks and gave them a good squeeze. That was payback.”

After the cocaine bust, his dad and stepmum Christine came to live with Frankie in an attempt to keep him on the straight and narrow.

Then he was offered a retainer to ride for leading owner Sheikh Mohammed’s Godolphin racing operation. In 1994 he was champion jockey for the first time, then repeated the feat a year later.

His place in sporting immortality was secured in 1996, when he smashed the bookies for £40million with seven wins in one day at Ascot. His fame reached far beyond the Sport of Kings.

A year earlier, he had met classics student Catherine, the daughter of a New Zealand veterinary professor, when she was leading a horse he was riding at Haydock. Catherine recalls: “I knew I liked him from the start. He was cocky and cheeky and super-confident.”

Frankie asked her out to the cinema, followed by a meal at Pizza Express, and Catherine says: “He proceeded to talk about himself for four hours, which was OK, because he’s had a fairly interesting life.”

They married in 1997, with Rolling Stone Ronnie Wood playing guitar at the wedding, and have children Leo, Ella, Mia, Tallula, and Rocco.

Yet for all his wealth and popularity, Frankie knows well how easily fate can snatch it all away.

On June 1, 2000, a Piper Seneca light aircraft with Frankie and fellow jockey Ray Cochrane as passengers, crashed on take-off from Newmarket.

Today Frankie says that as the aircraft hurtled earthwards, he thought: “I was just disappointed that I was going to die. I had got married, had six-month-old son Leo and was riding Dubai Millennium, the best horse in the world.

After the impact, Ray dragged a bloodied Frankie from the burning plane but was unable to pull pilot Patrick Mackey clear before it exploded in flames.

“It goes without saying that it was a traumatic experience. I was obviously very sorry I lost my mate Patrick. I don’t think I was myself for the next three years. My family helped me pull through it.”

Frankie was in hospital for weeks and the accident changed his life. He stopped the grind of riding seven days a week and chose his mounts more carefully. Even so, his career hit even greater heights. He was champion jockey again in 2004 and in 2007 he won his first cherished Epsom Derby on Authorized.

Yet his life then took another downward spiral. Though he was Godolphin’s top jockey, younger rivals were frequently given the plum rides.

Frankie says: “It’s like having Ronaldo and putting him on the bench. I felt humiliated.”

It was 2012, and feeling low and frustrated, he invited friends over for a night of revelry at his home.

Soon afterwards Frankie split from Godolphin — then returned a positive cocaine test when riding at a French race course.

It led to a six-month ban, leaving him at rock bottom. When he began riding again in May 2013 he went a whole month without a winner from 50 rides.

Wife Catherine — his “rock” — gave him “a real kick up the ass” and it was the wake-up call he needed.

Frankie renewed his working relationship with trainer John Gosden and in 2015 won the Derby and the Arc de Triomphe on Golden Horn.

Then flying filly Enable gave him perhaps the most glittering moments of his career with two Arc successes.

Despite a number of bad falls, 5ft 4in Frankie doesn’t believe he is in the final furlong of his career. He said: “I’m still absolutely loving it. I’m 51 soon and not done yet.”

He now wants to win the Melbourne Cup, Australia’s most famous race — and it seems unwise to bet against this jockey with nine lives. 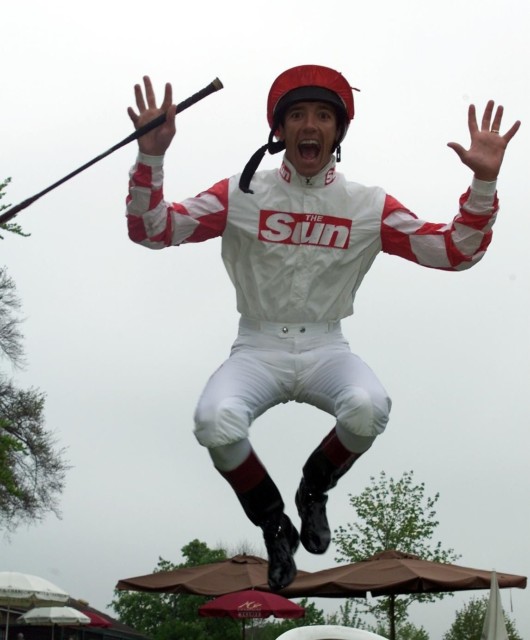 His place in sporting immortality was secured in 1996, when he secured seven wins in one day at Ascot 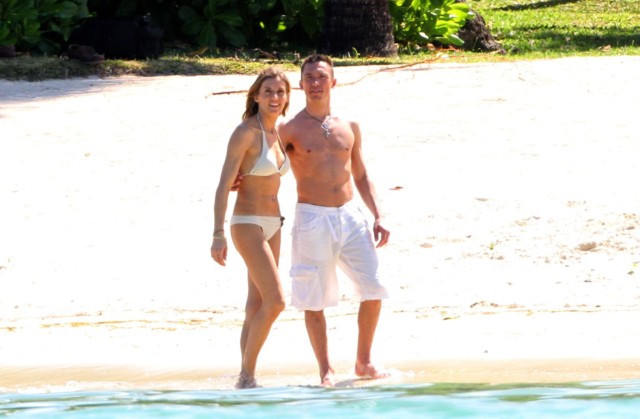 Frankie and Catherine married in 1997 and have children Leo, Ella, Mia, Tallula, and Rocco 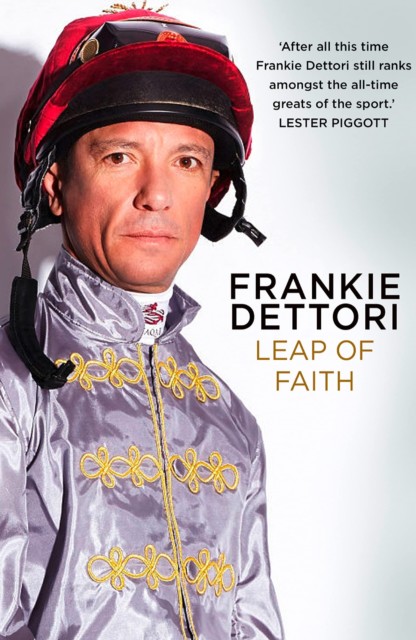 Frankie’s autobiography Leap Of Faith is out today