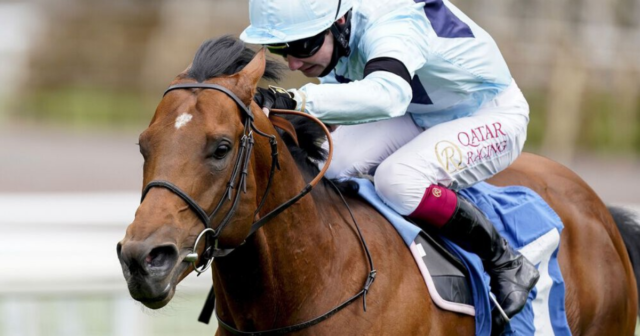 IF Starman wins today’s big ITV sprint at Haydock it will be down to me.

Starman is hot favourite for the Sprint Cup at Haydock

To be fair, it will have a little to do with Starman, so I correct myself. Success will be down to me and the classy July Cup hero Starman.

Why, you may ask?

Well a few weeks ago I suggested today’s Betfair Sprint Cup should be run on the all-weather, due to the fact that the race is usually run on rotten going. That kind of surface is of no use in finding out who is a star speedster.

That, though, was a sure sign there would be little rain at Haydock this week. Starman doesn’t like rain. He’s a lucky boy.

Walker deserves a change of luck with the going. More than once this season he’s had to change plans for his stable stars due to unsuitable conditions.

He didn’t change his mind last time, though, and Starman got stuffed on a juicy surface in the Prix Maurice de Gheest at Deauville.

Starman came to win, but then either got stuck in the mud or found the extra half a furlong too far. I suspect the former is more likely.

Marquand seems to agree. He said: “It will be nice getting back on better ground because in France it just felt as if he got stuck a bit on that tacky surface.

“It was an extra half furlong as well, which may have been a factor too, because three-quarters of a furlong out I thought he was going to win, but when I got into him he struggled to extend in the way he had done at Newmarket.”

That was in the July Cup, where Starman quickened clear of his rivals – including the admirable Dragon Symbol and defending champion Oxted – and looked sure to be crowned the best 6f performer of 2021.

Opposition to Starman, in a packed show live on the main ITV network, is headed in an 11 runner field by prolific winner Creative Force – the Jersey Stakes victor – for Godolphin and Art Power, from the Tim Easterby stable that landed the Nunthorpe with Winter Power.

But to be quite honest if Starman brings his July Cup form he will just win, and I won’t be surprised if he’s heavily punted into odds-on favouritism.

If it’s all about speed today, then there is no doubt the milers take centre stage tomorrow in what promises to be an absolute belter for the Prix du Moulin du Longchamp.

The presence of Richard Hannon’s Group 1 filly Snow Lantern and Breeders’ Cup hero Order Of Australia is enough to wet the appetite.

But of course most eyes here will be focused on Shadwell’s Baaeed, who has left people wondering if he is the best horse on the planet despite never having tackled the highest level.

The William Haggas-trained son of Sea The Stars has made rapid progress through the ranks in four unbeaten starts since the start of June, capped most recently when routing the Group 3 Bonhams Thoroughbred Stakes at Glorious Goodwood by six and a half lengths.

That smash up of El Drama had to be seen to be believed, as the latter is not a complete mug.

Haggas was once sure Baaeed would stay further than a mile, but he travels like a trooper and is such an exciting prospect.

Incredibly, on the respected Timeform ratings Baaeed is already the seventh best miler to have carried the blue and white silks of the late Hamdan al Maktoum.

Haafhd, Lahib and Mohaather head the list, with Baaeed joined by the excellent Bahri on 125 and 2lb ahead of the fabulous Al Bahathri! Considering Baaeed is only a Group 3 victor he has some billing to live up to.

This time next week we will all be looking for a terrific clash between the Eclipse hero St Mark’s Basilica and Breeders’  Cup heroine Tarnawa in the Irish Champion Stakes at Leopardstown. That will, by the way, be shown on ITV.

St Mark’s Basilica missed the Juddmonte International with a slight setback, but is reported to be back raring to go now.

This really is one of the best Flat seasons in living memory. Today might be about Starman, but in equine terms we have been blessed with star colts, geldings, fillies and mares. Enjoy.