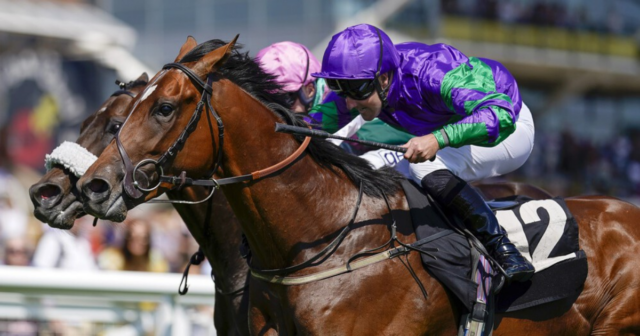 RACING’S forgotten man Tom Queally landed a shock 125-1 winner – on a horse with a name his trainer is surprised was ever allowed.

Thoughts next week at York will go to Frankel, the greatest horse ever, on the tenth anniversary of his amazing Juddmonte win.

We have a whopping 125/1 winner as Oj Lifestyle (Gleneagles) strikes second-time out for Tom Queally and @gl_racing in a big surprise at @NewburyRacing pic.twitter.com/zn8dWyiGuE

Since then, the jockey has failed to reach those highs but has steadfastly continued to ply his trade.

But these days he has tended to swap million pound-plus Group 1s for action at a much lower level.

That was perhaps best summed up when he got booked for a 125-1 chance in the seven-furlong juvenile contest at Newbury on Friday.

But class is permanent and Queally showed he still knows exactly how to handle a horse by steering the Gary Moore-trained runner to a freak victory.

The two-year-old, on just his second start, saw off 4-9 favourite Juddmonte-bred Leadman by a nose.

After the race, Moore expressed his shock at the win – and the fact the horse’s name got past British Horseracing Authority suits.

One presumes Moore could have been highlighting the reference to O.J. Simpson

Moore said: “It’s not often you see a horse win at those odds at any track, never mind here.

“No-one is more shocked than me that he has gone and done it.

“We expected better from him on his debut at Ascot and he was very disappointing, but he seems to have grown up since then.

“I am so surprised by this win that I have had no thoughts about what we might do with him next.

“I’m presuming it’s named after the owner but you would have to speak to him about that.

“It’s an interesting name and I am surprised they managed to get that through.”

Jackson had flown over from Dubai to see the win, worth just over £5,000, for himself.

And he said: “The favourite was unbeatable I heard, but everything is unbeatable until it’s beaten.”

Did you miss our previous article…
https://www.sportingexcitement.com/horse-racing/women-are-afraid-they-get-touched-up-when-someones-drunk-police-to-combat-lack-of-control-at-cheltenham-festival/