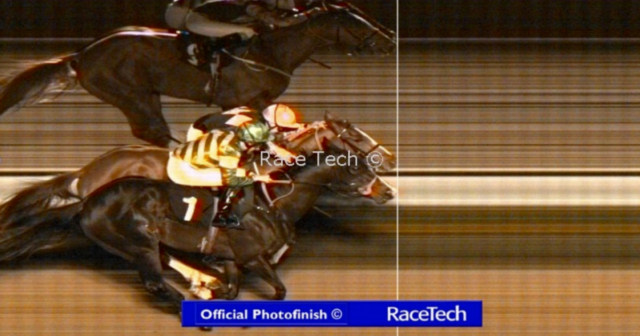 PUNTERS had to pick themselves up off the floor after this unbelievable finish to a two-horse race.

On paper it looked like giant 1-6 favourite Golden Sands had an easy job of seeing off 4-1 Havana Goldrush in the 7.50 at Wolverhampton last night.

But the result was not finalised until 25 minutes after post time – with the judge finally deciding on a dramatic dead-heat.

Golden Sands under Joe Fanning and Havana Goldrush under Liam Keniry were neck and neck for pretty much the entire straight of the 1m½f contest.

It looked like Keniry was edging ahead as the post neared, only for Fanning to eek out a bit extra.

Impossible to split them on the line, a photo was called and left to the judge to determine the winner.

But a stewards’ enquiry was also launched to determine possible foul play in the home stretch.

But it was not until 8.15pm, 25 minutes after post time, that it was finally decided the result stood and any interference had not affected the outcome.

It was good news for Keniry, whose victory – albeit shared – was his 1,000th in the saddle.

But even he couldn’t believe how it had all unfolded.

He told the Racing Post: “I wouldn’t imagine a two-horse race being a dead-heat – I’m not sure if that’s happened before really.”

You have to go back to August 2012 for the last time a match race ended in a dead-heat.

That was when Frankie Dettori and Martin Harley shared honours in a 7f novice stakes at Lingfield.

Keniry and Fanning posed for photos shaking hands after the race.

And it was around about that time punters were coming to terms with what they had seen.

One said: “I’ve never in 42 years of watching horse racing seen a dead-heat in a two-runner race.”

Another posted: “Two horses in the race and a dead heat. Incredible.”

While one comment read: “A dead heat in a two horse race?!? I’ve never seen that.”

Wow! @liamkeniry rides his 1000th winner in a dead-heat two-horse race with Joe Fanning. All you can do after that is shake hands @AtTheRaces @WolvesRaces! Yeeehaaa!