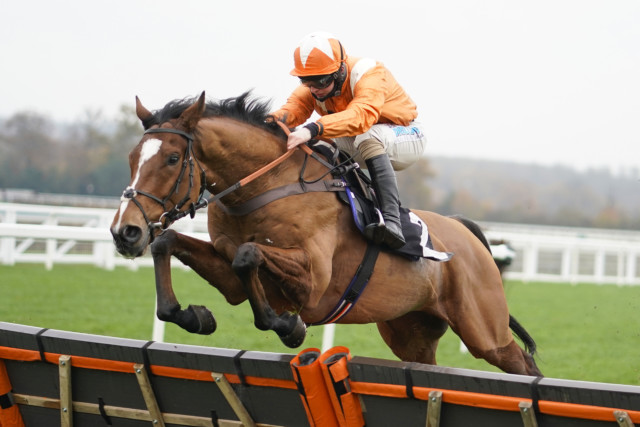 ITV Racing hits out screens again today with some top action from Sandown and Cork – after the late abandonment of Ayr.

Templegate has had a look at the cards and gives his in-depth guide to all the action below, singling out the bets that could win you a new year’s treat.

Metier can do the business at Sandown today

The racing coverage – which will now feature three races from Cork – starts at 1.30pm on ITV4 and finishes at 4pm.

IBLEO has run two really good races this season. He went down in a photo at Ascot on comeback before improving again when second at Cheltenham. He loves testing ground and can take another step forward.

Hollywoodien was impressive when scoring at Hereford last time and can handle this hike in grade. Trainer Tom Symonds is in fantastic form and soft ground is ideal. Only his ten months off is a concern.

Moonlighter took a tumble when well backed at Newbury. He showed lots of promise when hitting the post at Exeter before that and could bounce back.

Darebin won this two years ago and came right back to his best when scoring here last time. He’s got no weight and will be a threat. Fellow Gary Moore hope Early Du Lemo was second to stablemate Darebin here last month before coming a cropper at Ascot two weeks ago. Dropping back to this trip will help and he could have more to offer.

San Benedato is on a fair losing run but often runs in better company than this. The handicapper has given him a hefty nudge down the weights which should make him competitive.

METIER looked a potential star when lagging in at Ascot last time out.

He didn’t have to get out of first gear to land an easy win over this trip and deserves this hike in grade. This softer ground isn’t a bother as he cruised through it for a ten-length success at Newton Abbot in October.

Galice Macalo looks a threat receiving 7lb. She went close in a Listed contest here last time and is another proven in these conditions.

Adrimel ran in the Champion Bumper at Cheltenham and has been impressive in winning both hurdles starts here and at Haydock last time. He ploughed through the mud to score with plenty in hand and can improve again.

Smurphy Enki didn’t have a lot to beat at Plumpton last month but did it with lots left in the tank. He showed plenty of pace and isn’t out of this on just his third jumps outing.

Do Your Job was second in a Haydock Listed contest but has shown his best in bottomless ground so can’t be ruled out of hitting the frame at least.

Shakem Up’arry may not have stayed 2m3f when fourth last time and should be happier at this trip but still has a bit to find.

SIR IVAN showed lots of promise returning to fences last time with a close-up second at Leicester. He mixes chasing and hurdling and is easily the least exposed of these veterans.

Stepping up in trip could well help and Harry Fry’s horses are in decent nick at the moment.

Potters Legend ran well in a Cheltenham Grade 3 last month on the back of a convincing success. He has loads of staying power and will enjoy the ground.

Theatre Guide was second to him at Warwick and has hit the frame in the past runnings of this. He looks on a fair weight and should be right there again.

Late Romantic battled through the mud to score at Haydock and is blessed with lots of stamina, which will be a major asset today. He’s creeping up the weights but should be competitive.

Crosspark keeps going down in narrow finishes and ran a cracker when second in the London National here last month. He’s another who won’t be stopping but may have to settle for the podium again.

Last year’s winner Jepeck is back from the same mark. He’s been in shocking form since his success but can’t be totally ignored.

FRIEND OR FOE was impressive when scoring by 11 lengths at Warwick last time.

It was an armchair ride for Harry Cobden as Paul Nicholls’ six-year-old coped well with the soft ground. He’s gone up the weights for that but can improve again.

Highway One O Two is back over timber after failing to complete on both chase runs. He was a Grade 2 winner the last time he jumped a hurdle so has more than enough class to figure in ground he handles well.

Guard Your Dreams got the job done in style at Bangor when loving the deep ground. This is a hot enough race to make your handicap debut but he should be capable of much better.

Monsieur Lecoq has held his own in Graded company and will be fit from a run in France last time. He won this race two years ago and is respected.

The Pink’n has clocked up a hat-trick of seconds including in a Newbury Listed contest 35 days ago. That’s decent form and he goes well in the mud.

Zamperini was progressing well last year in quicker conditions and is best watched on this return from a long break.