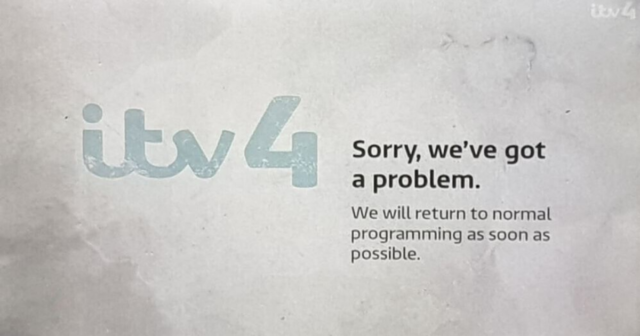 ITV racing viewers were left furious as coverage cut out mid-race due to ‘thunder and lightning’ – meaning they missed seeing who won.

The channel was showing the first of the new Sunday Series featuring contests from Scottish course Musselburgh.

But the picture could not have been lost at a worse time as it abruptly cut out right towards the end of the 5f sprint at 5.25.

Punters had no idea who had won the massive 17-runner race.

And viewers ended up staring at a screen which read: “We’re sorry for the disruption.

“We’re working hard to fix the issue and will return to normal programming soon.”

One punter joked it was like the ‘2010 World Cup moment all over again’ as viewers famously missed Steven Gerrard’s goal against the USA.

Commentator Richard Hoiles confirmed the weather had caused the loss of picture.

He said: “Thunder and lightning has impacted our techhnical journey from Musselburgh. We apologise for that.”

But one punter posted a photo of the holding screen with the message: “Two furlongs out, on the edge of my seat, wee heart going and then BOOF! Terrible.”

Another said: “Bloody hell, my father in law has waited for the 17:15 at Musselburgh to go off and when it finally does @ITV4 @itvracing have lost the picture.

“What is it with ITV and losing the picture for big sporting moments!”

One viewer wrote: “Oh dear, @itvracing have had a shocker there with all connections to Musselburgh seemingly lost mid race!”

Another commented: “My eyes were glued to the TV and my selection was getting involved at the front end then… heck who won? I since found out my horse was 3rd after all that.”

To their credit ITV Racing did tweet from their account: “We have lost communication with Musselburgh. We will re-establish connections as soon as possible.”

And it was fully back up and running as normal for the 5.45 contest.

Did you miss our previous article…
https://www.sportingexcitement.com/horse-racing/jockey-charlotte-jones-launches-her-own-gin-with-rugby-star-boyfriend-as-part-of-growing-business-portfolio