‘I’ve won a hell of a lot of money’ – Punter lands £26,000 after £8 prediction comes true thanks to Hayley Turner
Advertisement 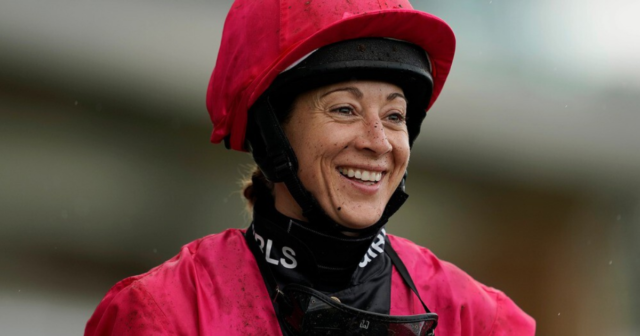 A RETIRED maths teacher is celebrating landing a £26,000 jackpot after his £8 prediction came true.

Rodger Alderson might be lending out his crystal ball soon after he plundered the Scoop 6 at Royal Ascot.

That Friday turned out to be a magical day for punters, with one landing more than £300,000 from a fiver after finding every winner.

Rodger, who lives in Wales, did too, but he did it on the Tote Scoop 6, a once-a-week bet where players aim to find six winners in six given races.

He successfully found Meditate, Perfect Power, Candleford, Inspiral, Heredia and Latin Lover – who was ridden by Hayley Turner – at the Berkshire track.

But the tension got so much that Rodger admitted he couldn’t watch the last race, even though his family knew he was on for a mega windfall.

Speaking of his win, he told the Tote: “It was absolutely gob smacking, it’s hard to put into words really because it’s a hell of a lot of money.

“You don’t expect to win, that’s not why I’m betting and therefore that is what makes it more exciting.

“If you’re not betting to win money then it is a total bonus.

“I enjoy a bet most days. I’m not betting because I expect to win, I bet because I enjoy watching the races more then.

“I suppose my philosophy really is to bet small and hope to win big – that’s why I enjoy the Scoop6 and Placepots, I very rarely have a single win bet.

“In the afternoon [of the win] I saw things were going well but my son-in-law is a keen racing fan and he was at work so I recorded the last race so I could watch it with him, so we didn’t watch it live.

“It took a bit of nerve and my family knew I was doing well so I told everyone not to ring me or text me until I had watched it.”

So what’s the secret to winning a lot from a little?

Well, Rodger confessed a ‘hell of a slice of luck’ was on his side as well as ‘gut feel’ and research of the form.

He did reveal one nugget which could stand fellow bettors in good stead going forward though.

Rodger said: “In the bigger races I tend to go for jockeys rather than horses, my crucial two wins in my Scoop6 were Tom Marquand and Hayley Turner.

“I think when you’ve got a 30 runner race over five furlongs, if you run it 100 times you’d get 100 different results, that’s why I go for the people that are in form and hope they can ride a good race.”

Incredibly, Rodger’s cash haul could be boosted substantially as he now has the chance to win £50,000 as part of the Tote’s Tournament of Champions.

And he has won for him and his wife a VIP trip to Paris to watch the Arc de Triomphe in October.

He added: “It is incredible, it really is the icing on the cake.”

Did you miss our previous article…
https://www.sportingexcitement.com/horse-racing/is-this-the-worst-loss-of-all-time-unthinkable-happens-as-horse-and-jockey-throw-away-victory-with-dramatic-crash/