Jockey, 29, dies in tragic mid-race fall from horse trained by his wife
Advertisement 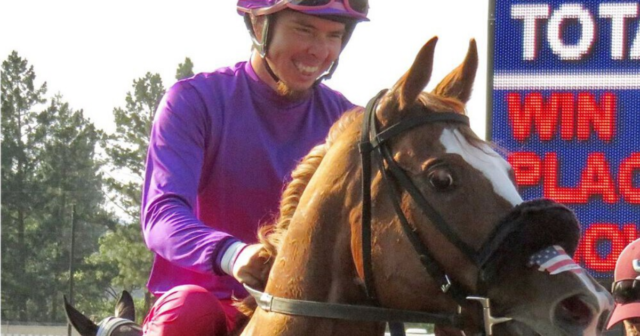 A 29-YEAR-OLD jockey has tragically died after a horrific mid-race fall from a horse trained by his wife.

Eduardo Gutierrez-Sosa, who had won 365 races during his career, smashed his head into the running rail before falling to the ground.

The awful incident happened at a racetrack in Oregon, US, on Wednesday, with reports confirming his death.

Gutierrez-Sosa was on two-year-old Godfather Advice, a horse trained by his wife Rosa Rodriguez, in the first race on the card.

The horse, who was not injured in the incident, hit the rail first, leading to Gutierrez-Sosa being thrown off and fatally injured.

Incredibly, the next race went ahead after a 30-minute delay.

The remainder of the card was eventually cancelled after race director Doug Smith confirmed the jockey had sadly passed.

Gutierrez-Sosa is survived by his wife and three children.

Local police and the state racing board are conducting a joint investigation into the accident.

A statement from Grants Pass Downs racecourse said: “With heavy hearts, all of us at Grants Pass Downs extend our deepest sympathy to the family of Eduardo Gutierrez-Sosa, who lost his life riding at Prineville, OR.

“A gifted rider and true gentleman, Eduardo will be greatly missed by our Oregon racing family.”

Racing has been hit by several tragic fatalities this year.

Lorna Brooke died aged 37 as a result of the injuries she sustained in a fall at Taunton last April.

Dad-of-two Juglall hit the ground heavily and his mount brought down another horse nearby who then appeared to land on top of the jockey in May.

Advertisement. Scroll to continue reading.
The jockey died after falling from a horse trained by his wife