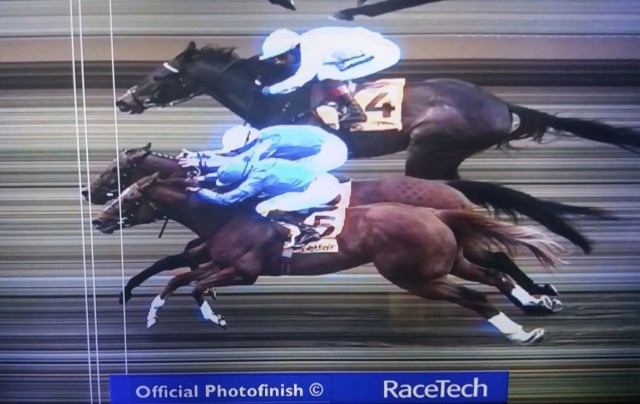 TOP jockey Ben Curtis was hit with a two-day ban after winning a thrilling photo finish.

Curtis was aboard Zabeel Champion, the 9-4 second favourite in the 1.50pm contest on 1000 Guineas day at Newmarket on Sunday.

He was involved in a stunning last-gasp finish that saw his mount just edge out 7-4 favourite Global Storm by a nose.

Frankie Dettori on 7-2 chance Grand Bazaar was ahead the entire way but fell to third in the dying few strides.

However, ITV racing presenter Ed Chamberlin confirmed Curtis’ ban at the same time he rode another winner in the very next race on 13-2 Mystery Angel.

Curtis, who has won more than £5million during his career, was suspended for two days for excessive use of the whip.

The stewards’ report on the British Horseracing Authority website read: “Ben Curtis, the rider of the winner, Zabeel Champion, was suspended for two days for using his whip above the permitted level from approaching two furlongs out.”

It is not yet certain when the ban will kick in but any missed days in the packed Flat racing calendar are likely to cause a headache for the jockey.

However, it did not really put much of a dampener on what was a great day for the 31-year-old.

And winning trainer Mark Johnston said of Zabeel Champion, a Poet’s Voice colt: “Jaber (Abdullah, owner) has sometimes not been too happy that we have been stepping him up to a mile and a half.

“Coming out of the dip with half a furlong to go I thought he will be telling me I’ve got it wrong, but luckily he stayed on at the end and done it.

Asked if Zabeel Champion will now be in his handicap team for Royal Ascot, Johnston added: “I suppose he will be – it depends what the handicapper does to him. He is in the Hardwicke as well.”

Charlie Appleby, train of runner-up Global Storm, said: “He’s come back and it was a good race. He’s run well and we keep knocking on the door – so hopefully it will open soon!”

Dettori said of third home Grand Bazaar: “We ran a super race and just got beaten on the line.”

Did you miss our previous article…
https://www.sportingexcitement.com/horse-racing/tom-bradys-kentucky-derby-outfit-goes-viral-as-nfl-star-is-mocked-for-looking-like-who-framed-roger-rabbit-villain