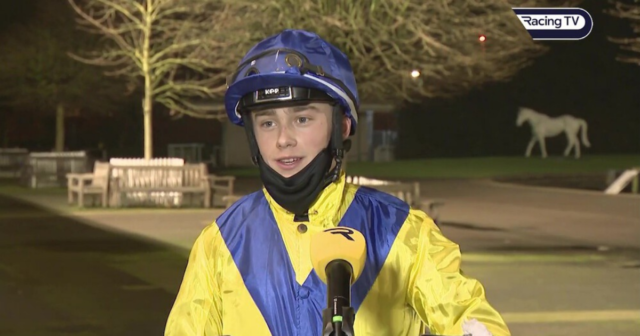 However, the rider dubbed the ‘next Frankie Dettori’ is set to race again next month after his ban was backdated.

Top jockey De la Sayette, 18, and dubbed the ‘next Frankie Dettori’ has been given a backdated six-month ban after testing positive for cocaine

A video leaked on social media appeared to show De la Sayette near cocaine being chopped up on a toilet cistern.

The clip claimed to have been filmed hours after the jockey won the £100,000 Lincoln at Doncaster last March.

That video – which called De la Sayette ‘Newmarket’s biggest junkie’ – was rejected as a ‘malicious’ attempt to discredit the rising star, and the rider issued a strong denial.

He insisted the video was from October 2019 and that he did not take cocaine then or after winning the Lincoln.

But in subsequent BHA tests, De la Sayette’s hair sample returned a positive for metabolites of cocaine and he admitted to taking the drug.

An independent three-person panel at a hearing in London this morning was told De la Sayette admitted taking cocaine ‘three or four times’ at parties between August 2020 and January 2021.

The jockey was living in racing HQ Newmarket at the time and was said to have been hanging around with a ‘bad crowd’.

He moved back in with his parents in February while continuing to ride out for top trainer John Gosden this summer.

But Ciara McElvogue, representing the British Horseracing Authority, presented evidence suggesting ‘the likely use of cocaine in the period of January to March’.

On the back of that, Tim Charlton QC, chairing the panel, said he had ‘misgivings about the fullness of the explanation you have given in the light of the expert evidence we have’.

He added: “This panel is nevertheless concerned about the fact that you have on the face of it been using cocaine after you had returned home.

“That’s a possibility that the expert evidence opens and therefore being at home does not seem on that expert evidence to have cured the problem you had with the use of cocaine.

“That’s a matter you will need to confront, perhaps, when you come before the licencing committee.”

De La Sayette – who is set to be able to race again from October 17 – may have to pass a fit and proper test with the committee before he can compete.

The jockey issued an apology for taking cocaine and for ‘misleading’ those around him in a statement released at the time his positive was announced.

He said: “I cannot apologise enough for my actions, both in respect of taking cocaine and of misleading those around me.

“Earlier this year I moved back home to live with my parents in order to take myself away from an environment where it was present.

“There are no excuses and I am sorry.”

Did you miss our previous article…
https://www.sportingexcitement.com/horse-racing/jockey-retires-over-blindness-fears-as-he-admits-i-cant-see-after-horror-eye-injury-that-featured-on-ae-after-dark