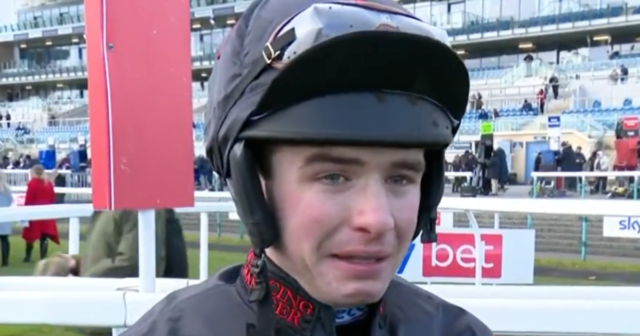 CHARLIE DEUTSCH breaks down in tears while paying tribute to a lifelong friend who died just hours before the jockey won two races in his honour.

But anything on the track paled into insignificance compared to the raw emotional pain the jockey was clearly feeling after the passing of a close friend.

Deutsch, who is enjoying a fantastic season under trainer Venetia Williams, did exceptionally well to hold himself together during an interview on Sky Sports Racing.

Welling up, he said: “I’d like to dedicate these two winners to a very good friend of mine, he passed away last night.

“He just loved his racing. And he’s been with me from when I was born to now.

“It was a bit of a shock for all of us, the family and everything.

“I found out this morning… then I had to come racing today.

“He would have loved it. I wish I could bring him here.”

Punters were full of praise for brave Deutsch fronting up and showing how much his friend meant to him.

One said: “Someone make sure he is looked after today.

Another wrote: “A great man riding over a fence, your friend being watching down very proudly.”

One comment read: “Sorry to hear fella you made me well up. Condolences to his family and friends.”

A fellow viewer wrote: “Jesus, my heart broke for him.”

While another comment read: “What a lovely lad @charliedeutsch2 dedicating his two winners to his lifelong friend Marcus Evans who passed away unexpectedly last night.”

Deutsch was speaking after victory on Funambule Sivola in the 1.15.

That was one of two on the day, with the jumps jockey also victorious on 11-8 favourite Skytastic in the race before.

Deutsch’s career has gone through an incredible resurrection since his time in prison.

The jockey’s career threatened to go off the rails when he was jailed for ten months for dangerous driving and escaping police custody whilst over the drink-drive limit after a night out with pals.

He panicked when he was stopped by police and asked to take a breathalyser – and a subsequent 100mph car chase only ended when cops deployed a stinger.

Deutsch came out a much better person and is now regarded as one of the best jumps jockeys around.

He can look forward to the much anticipated Cheltenham Festival in six weeks.

Another winner on the biggest stage of all would be just desserts for a man who proved himself a true class act.

In this article:Cheltenham, Cheltenham Festival, Doncaster