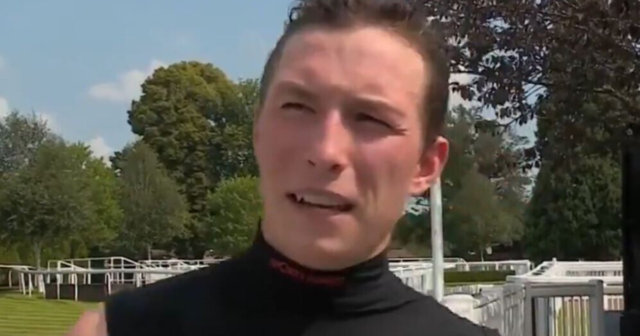 THE jockey who was disqualified and banned for losing weight sweating was stripped of a win and banned AGAIN just 24 hours later.

But finally there was some good news for poor old Jason Watson, after he bagged a winner on the brilliantly-named Hooves Like Jagger.

Watson was hit with another ban before gaining revenge with a win on a brilliantly-named horse, completing a rollercoaster 24 hours

Watson blasted the ‘extremely harsh’ punishment dished out by stewards after he weighed in light following a race at Lingfield on Wednesday.

The jockey, who finished second on Tindrum, was 2lb lighter after the race than before.

He put the difference down to weight lost sweating, but stewards weren’t having it and handed him a ban.

There was more bad news on Thursday as Watson, 21, was stripped of a win and slapped with a three-day ban for a mid-race incident.

The rider was first past the post on 11-4 favourite G’Daay in a Class 6 6f handicap at Yarmouth.

But upon review of the footage, stewards determined he had hung left on his mount and interfered with the path of runner-up Molly Shaw.

The placings were then reversed, with G’Daay named runner-up and Molly Shaw the winner.

The stewards’ report read: “Watson was suspended for three days for careless riding as he continued to allow his mount to drift left-handed without timely correction, carrying MOLLY SHAW off its intended line for a significant period.

“The stewards considered that the interference had improved G’DAAY’s placing as MOLLY SHAW had been carried approximately ¾ of the width of the track inside the final furlong by G’DAAY, and the filly lost more ground than the official distance of ½ length between both horses at the line.

“The stewards revised the placings.”

That capped a rollercoaster 24 hours for the young rider, who was furious at his first two-day ban for weighing in light.

He said: “I don’t need to tell anyone that it’s a very hot day and when I weighed out, I was flickering on the right weight anyway.

Watson, in the red and white in front, was banned for ‘careless riding’ after this incident

“I feel as though it was a bit unfair, but I feel more sorry for Mrs Main [the trainer, fined £500] and the owners because it’s hard enough to get anything out of this game after the pandemic.

Did you miss our previous article…
https://www.sportingexcitement.com/horse-racing/giant-25-metre-bar-room-for-100000-punters-and-fun-for-all-the-family-its-party-time-at-qatar-goodwood-festival

In this article:Goodwood, Lingfield, Yarmouth