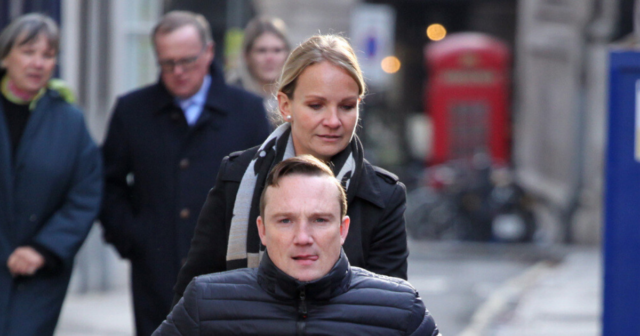 JOCKEY Freddy Tylicki ‘shouted for survival’ before the fall that left him paralysed, the High Court heard as part of the jockey’s £6million legal battle.

Tylicki’s legal team also claimed Graham Gibbons, who the former jockey is suing, was ‘dangerous in the extreme’.

Tylicki, 35, now lives in a wheelchair following his ‘life-changing’ injuries suffered as a result of the 2016 Kempton fall.

Gibbons, the defendant in the five-day trial, denies any wrongdoing.

Tylicki claims his injuries occurred when Gibbons, on Madame Butterfly in the 1m race, manoeuvred his horse to the inside running rail as they ran right-handed.

The former Flat jockey, who was born in Cologne, Germany, alleges this caused Madame Butterfly to move into the path of his horse Nellie Deen.

Tylicki claims he shouted ‘Gibbo!’ to alert the jockey and ‘discourage him from persisting on his path’.

“It was a shout for survival if I’m honest because I knew what was going to happen next. But there was no response.”

Tylicki added: “He (Gibbons) had full control of the situation. The pressure from my left continued until he bumped me.

“Then, instead of coming off me, he continued to put the pressure on and get into my racing line and basically wiped me out.”

Gibbons’ solicitor Patrick Lawrence QC referenced jockey Pat Cosgrave as saying Tylicki had been ‘a bit ambitious, had gone for a gap that wasn’t really there’.

Tylicki, who works as a pundit for Sky Sports Racing and was shown walking again thanks to ‘robot legs’ two years ago, disagreed and said: “All he had to do was slightly shift to the left.

“But the opposite happened. He went right. When I shouted at him, he still had plenty of time to shift to the left. But the shout was ignored.”

Gibbons said the incident was a ‘racing accident occasioned by the horses coming together, as described, as they travelled at speed around the bend’.

Stewards on the day ruled the incident was an accident but Tylicki told the court they could not have known then the seriousness of his injuries.