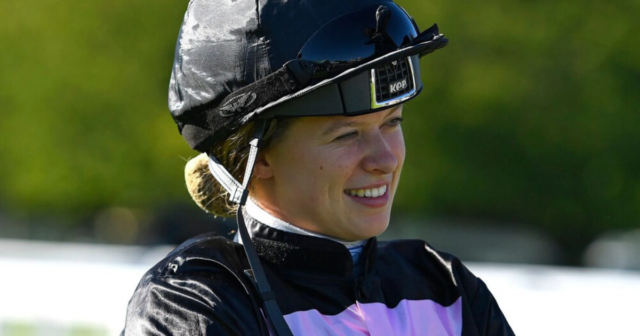 FORMER jockey Hannah Welch claims she quit riding over jumps after she was angrily confronted by Robbie Dunne.

And she feared “retribution” from riders if she reported the incident.

Welch appeared via video link on day three of Dunne’s disciplinary hearing at the BHA headquarters in London.

She was cross-examined for 30 minutes by lawyer Roderick Moore, during which she alleged Dunne “shouted and swore” in her face after a race at Chepstow in November 2018.

She said his expletive-laden tirade lasted around a minute and he continued despite her breaking down in tears.

Welch, now pursuing a career in nursing, gave up as a jump jockey three months later.

As part of the investigation into Dunne after Bryony Frost’s allegations of bullying, ex-BHA head of integrity Chris Watts asked Welch for a statement.

That document was read out to the panel, and Welch was visibly angry when recalling the confrontation. She said: “He confronted me in the weighing room and said I had cut him up on the top bend — he was shouting and swearing.

“He was standing very close to me and I was crying and he did not stop.

“This incident has played on my mind a lot ever since it happened. I was incredibly upset afterwards and it was a contributing factor to me giving up National Hunt racing, so it is not something that is easily forgotten.”

In her witness statement Welch also said: “When I look back on it I find it bizarre no other jockeys intervened and said that he had gone too far.”

In his own witness statement, Dunne denied he had ever sworn at Welch in the weighing room and said he remained calm while discussing the race with her.

Moore suggested other jockeys did not step in because Dunne “hadn’t crossed a line”.

Welch replied: “Do you think shouting and swearing at a young girl isn’t crossing a line?”

When asked by panel member Alison Royston whether she felt able to report the incident, Welch, 24, added: “I thought it would not be regarded as serious enough and there would be retribution for me. I felt other jockeys would not like the fact I had reported this.”

The panel also heard evidence from a fence attendant, who cannot be named.

He said he overheard Dunne calling Frost a ‘f***ing sl*t’ at Stratford in July last year. Riders Lorcan Murtagh and Adam Wedge were next to Dunne at the time.

The attendant, who has worked on racecourses for 14 years, said he had heard lots of bad language between jockeys in that time, but that the incident was a “whoa moment”. And he was shocked the riders who had been “within earshot” had not come forward as witnesses.

He said: “It’s quite a significant point to me the jockeys have not come forward. In my mind, they absolutely would have heard the same thing I heard.

“It was indistinguishable at first, then the volume was raised, the level of aggression was raised and Dunne spat out those words I listed.”

Wedge told the BHA investigation it ‘was nothing out of the ordinary’ and that he had ‘never seen bullying of Frost by Dunne’.

The witness said: “That’s between him and his conscience. I know my conscience is clear and that’s the reason why I submitted the statement. I know what was said, I know the manner in which it was delivered.

“To me, the word bullying implies a longer-term thing, but this was a very personal, very aggressive, statement that in my experience on racecourses is very much out of the ordinary.”

Watts, who resigned from his post with the BHA in September, was also cross-examined.

Moore was critical of his handling of the investigation, claiming he left information out of his report so it would be favourable towards Frost, something he denied. The hearing continues next Tuesday.