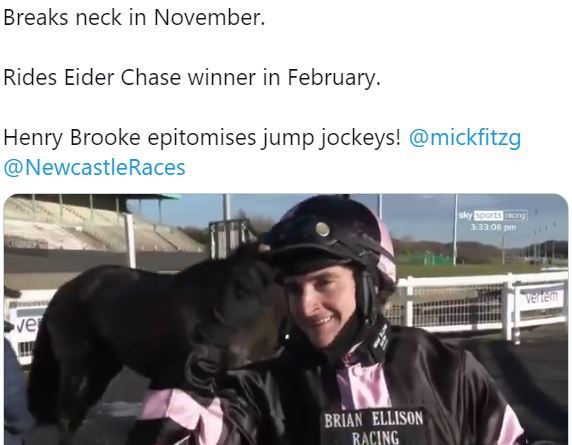 The 15-2 shot battled strongly under Brooke’s urgings to narrowly see off Crossley Tender by three-quarters-of-a-lengths.

Brian Ellison’s horse took the £43,000 first prize at the end of the four-mile and two-furlong marathon.

And for Brooke it was another career highlight and especially emotional after a challenging season.

Brooke broke his neck after a fall at Oliver Greenall’s yard in November, and only found out after driving himself to hospital.

Speaking after today’s win, he said: “That’s absolutely brillaint. I got there soon enough, I knew this horse pulls himself up in front.

A titanic battle all the way to the line

“But look, he’s a talented horse and Brian has done really well with him. There aren’t many horses that win three or four bumpers and then go on and become lovely staying chasers.

“He’s a proper nice horse and there was plenty left in him as well.

“Brian and [owner] Mr Martin have been really good. To have their support of people local to me.

“I’ve been riding out at Brian’s plenty since I’ve been at Jack Berry House and look it’s all worthwhile now.

“It couldn’t have gone better to be honest, so I’m delighted.”

Brooke has suffered more than most on the injury front and was once even placed in an induced coma after a fall in 2016.

Advertisement. Scroll to continue reading.
In this article:Hexham, Newcastle